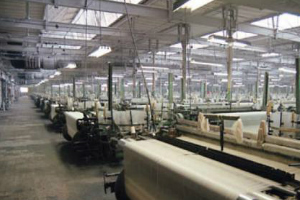 Will Mankai Textile Industrial Park be a blessing for Egypt's textile sector?

Egypt's experts in the textile industry have concerns that the establishment of the largest Chinese textile city in the country â€” known as Mankai Textile Industrial Park â€” will divert the government's attention from supporting the loss-making local textile industry and from helping it gain competitiveness in the international market.

On Jan. 16, Egypt's Minister of Trade and Industry Amr Nasser announced that China's Ningxia Mankai Investment Co., which has been operating in the textile industry for more than 10 decades, has made an investment of 2.1 billion Egyptian pounds ($121.6 million) to establish the infrastructure for the first phase of the Chinese textile city in Sadat City, north of Cairo.

Nasser said the Armed Forces Engineering Authority has completed about 50% of the construction work in the first phase of the Chinese textile city. The whole city will spread over an area of 3.1 million square meters (1.2 square miles) and house 592 factories.

Negotiations between Egypt and China on building the textile city started in May 2017, and the two sides signed an agreement for establishing it in the industrial city of Sadat on Nov. 5, 2017.

Nasser said the pilot operation of the first phase is planned to start in May, adding that the first phase, which will include building 150 factories, is set to be completed by the end of this year.

Mankai Investment has signed preliminary sales contracts with 49 Chinese factories for the first phase and is negotiating with more than 60 Chinese investors to sign contracts selling more factories for the same phase. The project includes four phases and will be developed over four years (until 2022).

he idea that Egypt's textile and garment industry has started to gain the attention of foreign investors such as clothing-export giant China inspires optimism and fear at the same time. The establishment of the city could be a value added to the country's economy as it is expected to boost the state's production and volume of exports in the textile sector. But there is also fear that this city will complicate matters for the state-owned weaving and textiles companies â€” which are suffering from low productive capacity â€” and drive them out of the market.

Mohamed el-Morshedy, chairman of the chamber of textile industries in the Federation of Egyptian Industries, told Al-Monitor, â€œThe spinning and weaving industry in Egypt is made up of the state-owned business sector that includes 32 companies, the investment sector that includes companies owned mainly by foreign investors, and the Egyptian private sector.â€

â€œThe performance of state-owned textile companies has been going downhill since the 1990s. They have been left without being updated and supported by the state, and consequently, they ended up being just huge complexes in various governorates with outdated machinery, a large number of unskilled workers with a clear shortage of raw materials and liquidity,â€ Morshedy said.

Morshedy said the problems of the local textile industry started with the liberalization of the cotton sector in Egypt in 1994. Liberalization exposed farmers to volatile global prices and rising fertilizer costs, leaving the market unstable and shrinking. This pushed farmers to turn to the production of more lucrative crops. Consequently, Egypt saw the 1 million acres of cotton crops cultivated in the early 1990s gradually dwindle over the years, leaving local textile factories unable to secure supplies of cotton.

â€œWhat also cripples the productivity of state-run textile companies is that they work with outdated machines that have not been replaced with new ones since the 1960s,â€ Morshedy said.

According to a Jan. 13 statement by the minister of the public business sector, Hisham Tawfik, of the 32 companies of the state-run Cotton and Textile Industries Holding Company, 23 are operating at losses totaling 3 billion pounds (about $174 million) annually, while the remaining nine are making just slim profits.

Morshedy believes that the establishment of the Chinese textile city appears to be a lifeline for the local textile industry. But, practically, the start of the work of the new factories inside the city â€” which will be using modern machinery and equipment â€” could spell the end of the existing undeveloped state-run textile factories.

â€œIt would have been better for the Egyptian government to have developed the existing state-run textile factories through coordination between the Egyptian Ministry of Public Business Sector and Mankai Investment, which has decades of experience in the textile industry to support the state-run textile factories and help them to gain a foothold in the international market,â€ Morshedy added.

However, the chairman of Egypt's Textile Export Council, Magdi Tolba, said the establishment of the Chinese textile city can turn Egypt into a major international and regional exporter of textiles.

â€œThe production of the Chinese textile city is aimed at foreign markets and not for local consumption. Hence, it can play a pivotal role in pushing up Egypt's economy through increasing the volume of its exports,â€ Tolba told Al-Monitor.

He said Egypt's textile-export volume is very low compared with other emerging markets such as Vietnam and Bangladesh. This is why, he added, the establishment of the Chinese textile city in Egypt is an opportunity to make use of Chinese expertise in advancing the Egyptian textile sector and making it competitive with the world's top producers and exporters of garments.

According to data released by the World Trade Organization in 2018, Bangladesh is the second-largest apparel exporter in the world after China. In 2017, Bangladesh exported garments worth $29 billion. In the same year, China exported clothing items worth $158 billion, and Vietnam exported $27 billion worth of garment products.

Meanwhile, Egypt's exports of readymade clothes during the first nine months of 2018 were just $678 million, according to a report issued in November by Egypt's General Organization For Export and Import Control, which is affiliated with the Ministry of Trade and Industry.