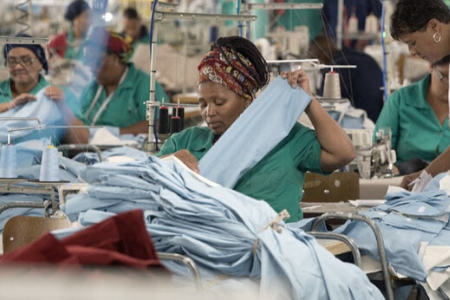 South Africa’s biggest clothing retailers have promised to purchase an additional 85 million units in locally manufactured clothes, shoes and leather goods over the next few years in an attempt to boost the local textile industry.

This undertaking by some of the biggest players in the clothing retail sector will boost the acquisition of locally produced goods from its present level of 44% to 65% by 2030.

The announcement was made at the SA Investment Conference in Sandton, where a master plan for the development of the local textile, clothing, shoe and leather industry was signed by, among other parties, government, labour, the Foschini Group, Pepkor, Edcon, Mr Price and Woolworths.

The textile industry has been pleading for protection and intervention since the 1990s, and government’s current industrial policy action plan notes that the industry has lost about 120 000 jobs since the drastic reduction of import tariffs during that period.

The industry presently employs about 95 000 people and contributes 2.9% to South Africa’s GDP.

According to the master plan, government pledged to take decisive action against illegal imports, and unions bound themselves to adjustments in the employment environment, which would increase competitiveness.

Manufacturing companies promised R6.8 billion in investment over the next five years.

This is part of the R370 billion in investment pledges made during the investment conference and will contribute to President Cyril Ramaphosa’s goal of achieving R1.2 trillion investment in South Africa over the next five years.

According to the department of trade, industry and competition, the implementation of the textile master plan will create an additional 120 000 employment opportunities in the value chain, with 70 000 of these being in manufacturing.

Professor Justin Barnes, chairperson of B&M Analysts, which was involved in the development of the programme as well as support programmes for the vehicle manufacturing industry, last year told City Press’ sister publication, Rapport, that increased domestic production was an important step in stabilising the textile and clothing industry.

More than 60% of textile, clothing, shoes and leather products for the local market are presently imported.