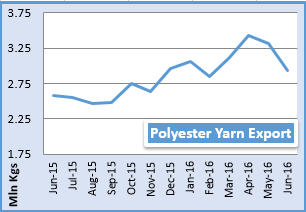 Polyester spun yarns were exported to 49 countries in June with total volumes at 2.93 million kg, of which, 23.2 per cent was shipped by Turkey alone. Twelve new destinations were found for polyester yarn this June, of which, Canada, Argentina, Uganda, Algeria and Russia were the major ones.

Turkey, Egypt and Indonesia were the fastest growing markets for polyester yarns while four countries did not import any polyester yarns during the month including Botswana and Nigeria.

Brazil, Egypt, Germany and Indonesia were the fastest growing markets for viscose yarns while Portugal, United Kingdom, Canada, China and Turkmenistan were the new major markets.

Pakistan, South Korea and Vietnam were the major ones among the 7 countries that did not import any viscose yarns during the month.