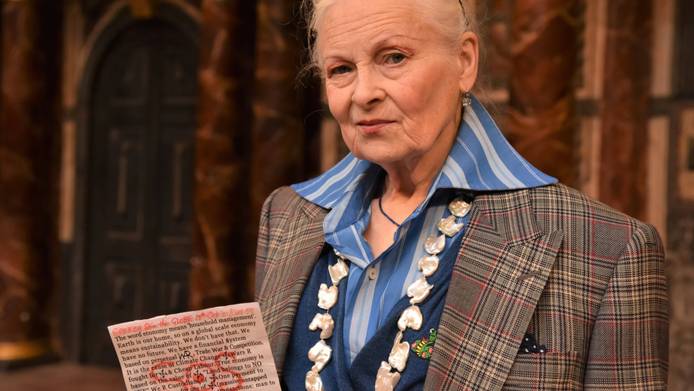 British fashion designer, Vivienne Westwood, has joined the Letters to the Earth sustainability effort and will release her own letter through the organization in the lead up to the United Nations Climate Change Conference (COP26).

In a sneak peek video of Westwood reading her letter, she said that “So on a global scale, economy equals sustainability." She is one of a number of well-known personalities who have signed on to the campaign, which aims to serve as a "global push for aggressive climate action from world leaders.

The project, which was developed in partnership with Culture Declares Emergency, encourages people to write letters about climate change. Since its inception, the organization has received hundreds of entries, some of which have come from well-known public figures such as Yoko Ono. This latest initiative, developed in the lead-up to COP26, aims to have the same impact, with presentations held at Shakespeare's Globe and released over the course of a week leading up to the climate summit.

According to a statement on Westwood's website, the word economy" means "household management. Because the Earth is our home, economy means sustainability on a global scale. That is something we do not have. We don't have a future. Our financial system is founded on a never-ending trade war and competition. The true economy is built on land value. No one owns the land.

The designer grabbed the chance for her spring/summer 2022 collection to make her opinion on sustainability crystal clear.

The Victorian-era inspired collection, dubbed 'Save Our Souls,' was created using recycled and reused materials, as well as regenerated wool. In addition to the line, a statement with political messaging emphasized the designer's approach, directly mentioning government devastation and climate change.

Leading up to COP26, Letters to the Earth will post one talk a day on its social media channels, beginning today with a presentation by television presenter Laura Whitmore, and letters from novelist Ben Okri and actor Freya Mevor are also expected.

In addition, 30 corporate executives have signed on to the initiative via letters. The platform is now seeking members of the general public to submit their own letters and video messages, with proposals to be presented at conference events. The video for Westwood's will be released on October 29.