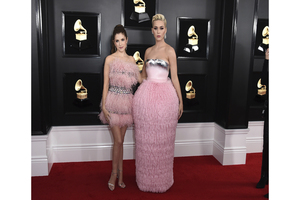 Sparkles and sequins at the Grammys

Fantastic Negrito, the Oakland, California-born blues artist, represented in a red suit with large, colorful swatches for pockets. His silver necklace of two fish used to be a belt buckle, said the upcycling enthusiast. Members of Weezer, on the other hand, kept it relaxed in scoop T-shirts under jackets that included mauve and baby blue.

Shawn Mendes went for a deep blue Paul Smith jacket with wide black lapels and open collar underneath. "I was so nervous to dress for the Grammys," he told the AP. "I felt like, how do you be classy and still stand out?" Purple was an It shade of the evening. Grammy winner H.E.R. sparkled in the collar in a gown made for her by Coach, with sunglasses in the same shade. "It makes me feel like I'm shinin'. I feel like a star," she said.

Sparkly, studded and strutting in designer looks, the Grammys parade of often out-there fashion kicked off in a downpour Sunday, but that didn't dampen spirits as the music industry's best showed off their myriad outfits.

Cardi B had a spot of trouble walking in a sculpted look that evoked a mermaid in the half shell, pearls included. It was hatched in 1995 by Thierry Mugler. Michelle Obama popped up in a metallic trouser outfit onstage, Jennifer Lopez donned a huge white bejeweled hat and Lady Gaga chose a silver strapless sequin gown with a high slit and side ruffle, thanks to Celine.

The Lopez topper pointed to a popular accessory of the evening - statement hats. It had a brim for miles and was embellished to match her dress of the same shade. She appeared relaxed in her Ralph & Russso look as she posed for photographers with boyfriend Alex Rodriguez, who wore a multicolored dress jacket. Katy Perry, meanwhile, arrived in a pink Balmain confection that prompted comparisons to a cake topper.

The former first lady's look was custom by Sachin & Babi. Lending a hand opening the show, she earned a rousing welcome from the crowd in Los Angeles. As for the guys, some went wild. Post Malone was in a light pink embellished jacket and matching pants. Kyle Tree of the EDM duo Grey was inadvertently ready for the weather in a rain slicker that was, yes, the color gray, as was his hair and that of music partner Michael Trewartha.

The K-pop sensation BTS showed up in black tuxedos and colored hair, including purple and green, while Maren Morris sported a huge yellow winged decoration on one shoulder of a floral halter gown with a full loosely pleated skirt and plunging neckline, from Galia Lahav Couture.

"I don't know, I'm all about subtlety," Morris joked to The Associated Press. Dolly Parton wore a short red dress with a ruffle lapel and a chunky jewel centerpiece. Dua Lipa won best necklace of the night, a huge diamond piece in a circular design.

There were attendees dressed as butterflies, neon looks and several outfits with long capes in unusual places, on jumpsuits and short dresses. Never shy fashion-wise, Janelle Monae also wore a wide-brim hat, pairing it with a short dress that had high pointed shoulders, courtesy of Jean Paul Gaultier. Top nominee Kacey Musgraves wore an ethereal belted gown in a nude hue with a daring fan-like bodice, by Valentino, while Camila Cabello appeared cozy in a long-sleeve sparkler of a bright pink gown with a high neck and open back, done by Armani Prive.