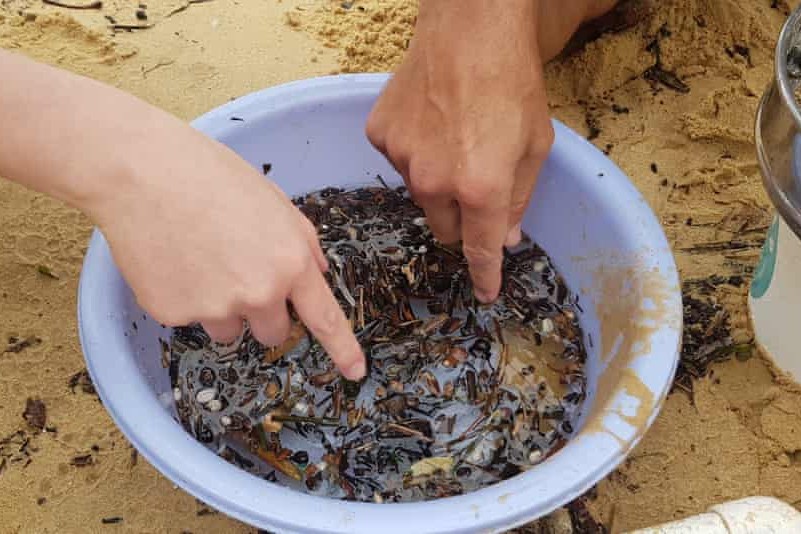 Scientists discovers a way to remove microplastics from water

Microbiologists claim to have discovered a way to naturally capture and eliminate microplastic waste from marine ecosystems using 'sticky' bacteria.

Hong Kong Polytechnic University researchers are using bacteria microbe to create 'nets' to trap microplastics in water and form an easily disposable and recyclable 'blob.' To absorb and extract microplastics, they took advantage of bacteria's normal ability to group together and adhere to surfaces, forming an adhesive 'biofilm.'

While the results, which were discussed at the Microbiology Society's annual conference, are still tentative, this invention could pave the way for long-term sustainable reductions in plastic waste by merely using something found in nature.

Microbiology researcher at PolyU, Sylvia Lang Liu said to prevent the ‘plastification' of our natural habitats, it is critical to creating effective methods that capture, collect, and even recycle these microplastics.

Microplastics are plastic fragments smaller than 5mm that are released into the environment by mistake during the manufacturing and degradation of items such as shopping bags or water bottles – or during daily tasks such as washing synthetic clothing such as nylon or using personal care products that include scrubbing microbeads.

Despite their small size, they pose a significant threat to the ecosystem. Microplastics are not readily biodegradable, meaning they remain in the environment for a long time, absorbing and accumulating toxic chemicals. They scatter into wastewater and the sea, endangering aquatic species that consume them and finally entering the food chain, posing a threat to human health.

Liu and his colleagues, led by Professor James Kar-Hei Fang and Song Lin Chua, developed a bacterial biofilm from the bacteria Pseudomonas aeruginosa that can immobilize and incorporate rogue microplastics floating in the water. These microbe nets catch and group microplastics, causing them to sink to the water's bottom. The researchers will then unlatch the microplastics from the bacteria traps using a “capture-release mechanism” involving a biofilm-dispersal gene, resulting in bulks of captured microplastics ready for recycling.

A researcher at the University of Edinburgh, Dr. Joanna Sadler said that this is a truly unique and exciting use of biofilm manufacturing to combat the plastic waste crisis. Capturing those small fragments so they can be degraded and eliminated from the atmosphere is one of the most difficult tasks of coping with microplastics. Liu and coworkers have shown a beautiful approach to this issue that has a lot of potentials to be transformed into a real-world wastewater treatment system.

The experiment was conducted as a proof-of-concept test in a safe lab setting rather than in the ocean or sewers, and it was conducted using the “aeruginosa” bacteria strain, which is a disease-carrying bacteria for humans and is unlikely to be used in large-scale projects. However, the researchers are optimistic that the system will be used to identify normal biofilm-forming bacteria in sewage or other watery conditions and then proceed from there.

Senior lecturer in molecular microbiology at the University of Strathclyde, Dr. Nicholas Tucker said that it's an exciting development in terms of microplastics capture. It would be important to see if it is scalable. More research on what types of surfaces to grow the biofilm on, according to Tucker, is required.

However, analysis like this exemplifies the many applications of microbial biotechnology and the incredible feats that tiny bacteria can achieve. Tucker said that this demonstrates that microbes can and will play a part in any step of the plastics life cycle.

December 2, 2021
Giorgio Armani to ban angora wool as part of fur-free policy
The Armani Group, announced that from the Fall/Winter 2022/2023 season onwards, it will no longer use angora wool