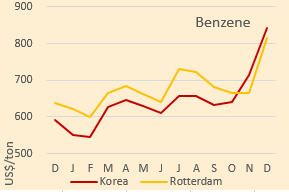 Benzene prices soared across regions in December but showed moderation later amid weaker demand in China. In US, spot benzene moved up to 16-month highs due to rising Asian numbers, a strong derivative styrene market and low benzene fixtures to the US. In Europe, benzene spot moved up during the month. Asian marker, FOB Korea surged 18% in December and declined 5.9% YoY. US spot prices rose 16.7% while it fell 7.3% YoY as compared to previous yearâ€™s average. European spot was up 22.6% on the month while it fell 3.5% YoY.

Caprolactum prices continued to surge on the back of moderate demand and rangeâ€bound benzene. Spot prices hit a 2-year high during the month on a CFR China and CFR Taiwan basis because of limited supply, feedstock benzene prices, higher domestic Chinese prices. Asian caprolactam spot prices in December were up 27.5% from last month while it declined 14.4% YoY.

Nylon chip prices in December skyrocket in line with surging caprolactum, given high crude oil and benzene values. Producers operated cautiously, leading to tight supply and low inventory. Converters trimmed operation and made rigid procurement. Coupled with healthy demand for engineering plastics/film grades, nylon chip market was bolstered a bit. Offers for Taiwan-origin chips were up 26.5% from last month. In China, bright conventional spinning nylon-6 chips were up 30.3% from November while semi-dull chips rose 30.1% on the month.

Nylon filament yarn prices soared in December given higher raw material cost which in turn eroded margins. Thus, suppliers trimmed run rates to below 70% with cautious mentality. Demand for warpâ€knitting, weaving and AJ covering sectors witnessed smooth sales while circularâ€knitting mills and lacing mills ran at lower rate. In China, semi-dull FDY70D/24F was up US cents 59 a kg from previous month while FDY40D were US cents 64 on the month.