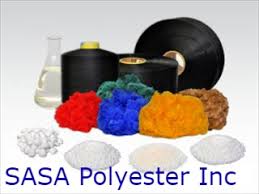 The firm, which exports more than half of its production to 45 countries, mainly in Europe, completed the fiber plant, the first of two projects prepared with the Project-Based Incentive System, previously approved by President Recep Tayyip ErdoÄŸan and published in the Official Gazette.

In a statement SASA General Manager Mehmet Åžeker noted the firm, founded in 1966 and later acquired by ErdemoÄŸlu Holding from SabancÄ± Holding, is the biggest polyester producer in the country. In their facilities, they make polyester used in almost all areas of life and currently produce 1,000 tons daily. Åžeker said they export more than half of that production to 45 countries.

The petrochemicals and fiber-type chemicals manufacturer in the southern city of Adana, SASA, is ready to start production in the first of the company's two projects, worth $1 billion with 25 percent in incentive support.

"We reach around $180 to 200 million in exports. We plan to increase our exports after constructing new facilities to increase daily production to 3,000 tons. Our $1 billion investment, 25 percent under incentive, is made here," Åžeker said. "Our fiber plant is completed, and we are in the commissioning stage, which takes about two to three months. We'll send our first products to our customers and start production after receiving their approval. The plant construction for Partially Oriented Yarn (POY), a kind of polyester, is almost finished. Our goal is to put it into operation at the end of 2019. In 2020, SASA will have a turnover of approximately $2 billion and will export about half of that."

Åžeker stated that SASA intends to make the raw material of the polyester they are currently using and that they have ongoing studies on this issue.

Åžeker added they would make the raw material for polyester together with their new investment in YumurtalÄ±k, Adana. "So, we can compete very easily with the Chinese. Right now, the Chinese are one step ahead of us due to their production, and they can sell it cheaper," he said. "We will reduce the amount of purified terephthalic acid (PTA), the raw material of polyester, entering the country after producing them, which will contribute approximately $1.5 billion to the current account deficit."

Åžeker pointed out that Turkey must produce raw materials and compete with the world, stressing the period of "importing raw material and the machine, processing them here, providing only labor and energy and getting the rest from abroad" should come to an end. He said that, "There will be no hardship in a country that produces. If we produce, we can share and consume together," noting that everyone should work hand in hand for the future of the country.