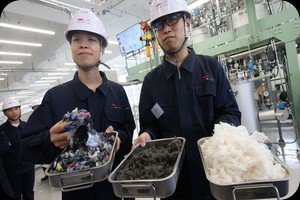 Edwin Keh Yee-man, chief executive of the publicly funded Hong Kong Research Institute for Textiles and Apparel (HKRITA), which developed the plantâ€™s recycling system, said the move would put the cityâ€™s textiles industry back on the map and boost the â€œmade in Hong Kongâ€ mark. He said that, "We could have opened (this mill) in China, 10 times its current size," Also,"But we decided to do it in Hong Kong to prove two things â€“ that we can solve our local textile waste problem locally, and that in such a small, compact city, sustainable (textile recycling) is feasible."

Keh added that, "Many think the only way to solve a waste problem is to just export it somewhere else, but thatâ€™s not a solution." He noted Beijing last year slapped import bans on 24 types of waste including scrap paper, plastics and textiles, shutting out a huge global aftermarket for post-consumer waste.

Old clothing and textiles will be accumulated by the firm from its retail partners or NGOs. Three production lines at the facility mechanically sanitise, sort and process the textiles into yarn in a largely automated process which can then be shipped off as raw material to mainland China and manufactured into new fabrics and garments. The operation requires at least six workers. Swedish clothing retailer H&M, which has worked closely with HKRITA on developing new recycling technologies, will take delivery of the first shipment of yarn in November.

Hong Kong may never regain role as a textiles manufacturing powerhouse, but new developments suggest it has not shed all of its post-war industrial legacy either. A new spinning mill â€“ the first in almost half a century to be built in the former garment-making hub â€“ will start churning out recycled yarn spun out of old, discarded clothes beginning this autumn.

The 19,000 sq ft Tai Po facility, owned by local textiles firm Novetex, is also the cityâ€™s first textile â€œupcyclingâ€ mill and when fully equipped, will be able to spin three tonnes of recycled fibre from roughly the same amount of textile waste daily, without affecting cost or quality. It is a small fraction of the 340 tonnes of textile waste discarded by Hongkongers every day, but the company believes it is â€œpossible in theoryâ€ to expand capacity to handle about a third of that figure in the future, reducing pressure on the cityâ€™s landfills.

Novetex, HKRITA and the H&M Foundation â€“ the retailerâ€™s non-profit arm â€“ have also set up a â€œminiâ€ garment-to-garment recycling shop at The Mills mall in Tsuen Wan.

The entire process operates without water use or effluent discharge. Novetex director and chief executive Milton Chan said that, â€œOther countries that have big manufacturing industries for cotton and wool such as Turkey may be interested too.â€ Chan said that new innovations in upcycling were vital because of the increasing costs and environmental concerns that came with producing conventional fibres, such as cotton, from scratch.

Speaking at the plantâ€™s inauguration, the cityâ€™s leader Carrie Lam Cheng Yuet-ngor praised the development and highlighted that the government was devoted to setting advantageous conditions for the â€œre-industrialisation of Hong Kong."