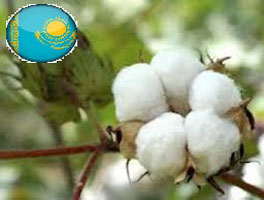 Kazakhstan did not have a single cotton variety of its own way back in 1991, but currently the country has 10 varieties and 5 of them have successfully passed state tests, The country is now exporting its cotton varieties to 11 countries â€” Russia, Belarus, Germany, Latvia, Moldova, China, Belgium, Iran, Ukraine, Italy and Korea, said Askar Nametov, chairman of the board of the National Agrarian Scientific-Educational Centre under the agriculture ministry.

Presently, the yield of raw cotton is 22-23 centners per hectare, although the potential of the production of new domestic varieties is 38-40 centners per hectare, quoted Nametov. The challenge is to raise yield by 30-40 percent along with improving fibre quality, which will help increase the produceâ€™s competitiveness in domestic and international markets.

About a quarter of the Kazakh population is employed in the agriculture sector. Family farms own nearly 70 percent of land in southern and south-eastern parts of the country and account for 95 percent of the total cotton production.

Despite being significantly larger in area than its Central Asian neighbours, the countryâ€™s cotton production is relatively lower due to the significance of grain cultivation and other food crops.

Agriculture accounts for approximately 6 percent of Kazakhstanâ€™s economic production. More than 74 percent of the countryâ€™s territory is suitable for agricultural production.