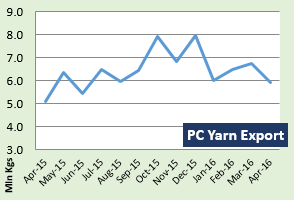 Indiaâ€™s yarn export to China rebounds amid weakening of Vietnam

The deceleration in spun yarn exports of India slowed down in November 2016 having fallen 21 per cent in volume terms and 14 per cent in value terms. Spun yarn (all kinds) shipments were at 90.1 million kg worth US$261.1 million or INR1,733 crore, implying per unit realisation of US$2.90 per kg which was down US cents 11 from previous month and up US cents 24 as compared to November 2015.

Chinaâ€™s cotton yarn imports from India recovered in November, and demand had stayed very strong with shipments of Indian yarns piling up in different ports like Qingdao. Cotton yarns from Vietnam are currently suffering from higher material costs, as the country needs importing its cotton.

Chinese investors could also refrain from developing spinning capacities in the Vietnam, after the TPP has been scrapped, meaning the Vietnamese apparel plants will not enjoy a duty-free access to the US market in the future.

In November 2016, 77 countries imported spun yarn from India, with China at the top accounting for 39.8 per cent of the total value with imports declining 12.5 per cent in terms of volume YoY and value edging down 4.3 per cent YoY. Bangladesh was the second largest importer of spun yarns in November and accounted for around 12.7 per cent of all spun yarn exported from India. Export to Bangladesh was down 37.6 per cent in volumes and 32.2 per cent lower in value.

Pakistan was the third largest importer of spun yarns, which saw volume plunging 49.9 per cent while it was down 39.2 per cent in value. These three top importers together accounted for around 55.9 per cent of all spun yarns exported from India in November.

Cotton yarn export was exported to 71 countries with average unit price realization declining US cents 15 a kg from previous month and up US cents 24 from the same month a year ago.

China was the largest importer of cotton yarn from India in November, followed by Bangladesh and South Korea. The top three together accounted for more than 63 per cent of cotton yarn imported from India.

Nine countries did not import any cotton yarn from India, including Mozambique, Latvia, Costa Rica and Benin. In November 2016, significant deceleration was seen in export to Lebanon, Lithuania, Kenya, Australia and El Salvador.