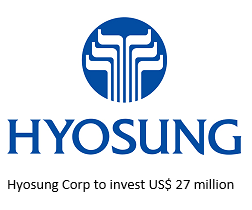 Hyosung Corp to invest US$ 27 million to increase spandex capacity

Hyosung Corporation, a leading textile company in South Korea plans to invest US$27 million to expand spandex capacity by 5000 tons in Istanbul, Turkey amid increasing demand from European and Middle Eastern markets.

The company is planning to complete the expansion by H1 2017 and the capacity will be 25000 tons per year. By then, it would also be ready to open a new factory in Quzhou, China, with annual capacity of 16,000 tons. The companyâ€™s total global spandex output capacity would be ramped up to 221,000 tons next year.

In 2009, Hyosung built a spandex factory in Ã‡erkezkÃ¶y, TekirdaÄŸ, about 100 kilometers away from Istanbul. Due to sharp increase in spandex from Europe and the Middle East, the textile company decided to construct a new factory on a site of 87,000 square meters near the existing factory. The company expects its market share of creoraÂ®, Hyosungâ€™s spandex brand, to grow to over 31 percent after the capacity increase.

They would make ceaseless efforts to increase the supply of spandex and develop products to meet the customersâ€™ demand at the same time.

Spandex is a synthetic fiber known for its exceptional elasticity. It is widely used for underwear, swimsuits, jeans and sportswear, as well as diapers and gloves for industrial use. It has been recently used in hijab, traditional clothe of Islamic women.

The textile company developed spandex with its own technology for the first time as a Korean company in 1992 and, since then, it has targeted the global market. The company has topped global market share in spandex for the last six years.