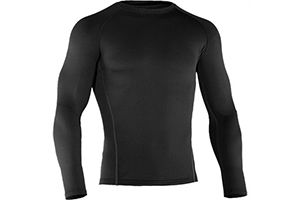 Developing a smart material which can regulate its temperature

Anyone who has ever worked in an open-plan office will have be aware of just how drastically different peopleâ€™s individual temperature preferences are. Itâ€™s one reason why the thermostat is arguably the biggest source of conflict in offices around the world. Wouldnâ€™t it be great if there was a material that could more easily adapt to temperature requirements; either trapping in or releasing heat as required?

Thatâ€™s exactly what researchers from the University of California, Irvine, have been developing. Inspired by the so-called â€œspace blanket,â€ the reflective blanket you often see marathon runners wrapping themselves in after a race, they have created a new type of material able to change its reflective properties upon stretching. Rather than having to take off or add layers of clothing to change temperatures, this dynamic material comes with the promise of regulating or controlling the temperature with just one garment. It would even be possible to link it up to a mobile device so you could control the property of your smart clothes with the tap of a smartphone display.

â€œEssentially, the material can act like a regular space blanket, reflecting almost all heat back to the body,â€ Erica Leung, one of the researchers on the project, told Digital Trends. â€œHowever, if the user becomes too hot, then the material can be stretched, releasing more heat from the body to maintain a comfortable temperature. The material is [created using] a metal coating with nanostructures that are anchored into a stretchy polymer backing. Therefore, in a relaxed state, the metal reflects the heat back to the body. When it is stretched, the metal coating breaks up into pieces, exposing the polymer backing and releasing more heat from the body. It can return to its original state easily over thousands of cycles.â€

Although itâ€™s still relatively early in development, the researchers already have several potential applications in mind. These could include materials for clothing, tents, space technology or even building insulation. It could be useful for any scenario in which itâ€™s necessary to control the emission of heat.

â€œWe certainly hope to commercialize this material in the future as we move toward integrating it into clothing,â€ Leung said. â€œEventually this material could be fully integrated into clothing, [with] an actuation system that allows complete user control through, perhaps, an app on the phone.â€