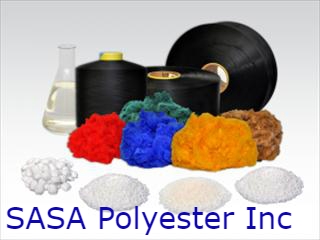 $8.5 billion investment to change the balance in the global polyester business by SASA

In 2000, SASA strengthened its leading position in the sector by establishing a joint venture with DuPont. Following the acquisition of DuPontâ€™s shares by SabancÄ± Holding in 2004, it became a wholly-owned subsidiary of HacÄ± Omer SabancÄ± Holding A.Åž. and was renamed ADVANSA. In 2005, the name of the group in Turkey was changed to ADVANSA SASA Polyester Sanayi A.Åž.

Mehmet Seker General Manager of SASA Polyester Inc said that, the company is in talks with the Ministry of Economy regarding SASA producing its own raw materials and continued, â€œWe will firstly produce raw material of polyester with this investment. After one step we aim to establish a petrochemical plant to produce that raw material. China and South Korea grew this way. Turkey also had to grow up like that. We have imported these products until now, after this investment we will produce ourselves now.â€

Seker said that, â€œWith the investment in the petrochemical field, we will cut down on imports. First of all, we will produce PTA (Pure Teraphthalic Acid) and MEG (Ethylene Glycol) which are our raw materials to meet our own needs and sell the rest.â€ He also added that â€œWith new polyester investment, in the production of polyester chips, fibres and filaments, we will increase our production capacity from 340,000 tons/ year to 3.1 million tons/ year, making us one of the largest producers in the world.â€

Mehmet Seker, General Manager of SASA Polyester Inc. said that, â€œWe have decided to invest to two projects. The first of these will be a polyester investment. The other will be in the field of petrochemicals.â€ He also added that, â€œThe projects will reduce the current account deficit to about $ 3.8 billion. With these investments, seven thousand additional jobs will be provided. When the investments are over, total production of SASA will increase to about 10 million tons.â€

H.O. SabancÄ± Holding A.Åž. acquired SASAâ€˜s majority shares from ADVANSA B.V in May 2011 and the business was renamed SASA Polyester Sanayi A.S. In May 2015, ErdemoÄŸlu Holding acquired all of the SASA shares of SabancÄ± Holding, and ErdemoÄŸlu became the main shareholder of SASA with 84.8% of its shares. 15.2% of shares are sold publicly.

Turkish company SASA Polyester Industry Inc ,one of the world's leading producers of polyester fibres, filaments, polyester-based polymers, intermediates and specialty products, has announced that it will invest $ 8.5 billion in two new projects and change the balance in the global polyester business. Once the investment has been completed, Turkey will move from a net importer to a net exporter position, in terms of polyester.