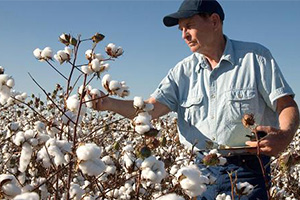 Cotton is in the grips of the bears, and fresh U.S. supply forecasts coming this week will probably keep it there.

Prices tumbled to a three-year low on Tuesday amid the outlook for big supplies at a time when consumption growth is slowing and American exports are hurting. Hedge funds are holding their biggest-ever bet that the declines will continue. Meanwhile, traders and analysts expect that the U.S. Department of Agriculture will raise its outlook for domestic stockpiles, with the hoard forecast to reach a 12-year high.

Cotton is down 26 per cent in the past 12 months, making it the worst performer in the Bloomberg Commodity Index, which tracks returns for 22 components. Sentiment has only gotten more bearish in recent weeks amid improving American crop conditions and slow progress in trade negotiations between the U.S. and China, the worlds biggest consumer of the fibre.

The USDA is scheduled to issue its monthly World Agricultural Supply and Demand Estimates report on July 11. The agency is expected to boost its estimate for world production for the season that begins Aug. 1, while lowering global consumption slightly and cutting the estimate for U.S. exports, according to the average forecasts of as many as eight analysts in a Bloomberg survey. Figures are in millions of bales; A bale weighs 480 pounds, or 218 kilograms There’s a chance the market could get even more dire as beneficial weather boosts the outlook for the U.S. harvest. In the week ending July 7, 54 per cent of the crop was rated good or excellent, up from 52 per cent a week earlier and 41 per cent last season, the USDA said Monday. Texas, the largest U.S. producer, and the far southern parts of the Delta got a boost from rain.

Cotton futures for December delivery fell 3.6 per cent to 63.28 cents a pound Tuesday on ICE Futures U.S. in New York, the lowest close for a most-active contract since June 2, 2016. The price fell for a fourth straight session, the longest slump in a month. In the week ended July 2, hedge funds increased net-bearish cotton bets to a record 37,665 futures and options contracts, U.S. government data showed on Monday.

World demand is apparently slowing, Louis Rose, director of research & analysis at Rose Commodity Group, said in a phone interview. I don’t believe there’s a lot of optimism regarding the U.S.-China trade talks.