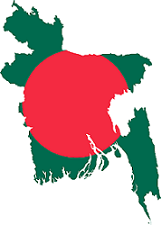 Textile and garment factories to halt production in Bangladesh

In Konabari and Gazipur Industrial area, the production of hundreds or textile and garments factories has been hampered for the last one week due to the suspension of gas transmission for a leak in the pipeline at Elenga in Tangail district.

Exporters will face difficulties to exports their products on time and might have to resort to expensive air shipments to meet the deadline.

They might have to offer discounts too if they miss the deadline.

More than 1,200 textile and garment factories have either suspended production or are running with electricity. They met the prime minister on Monday to express their concern and also expressed their concern to the energy minister as the factory owners have been suffering for the last one week.

There are about 400 composite mills in those areas, according to Rahman.

They want an immediate solution -- as the owners will face difficulties in the timely shipment of goods for the production halt.

The situation at the spinning mills is the worst and the spinning, dyeing and washing plants require continuous supply of gas with adequate pressure.

The production has been halted at the spinning mills due to the gas crunch. As a result, unable to supply yarn to the knitters.

If the situation prolongs, the knitters would face difficulties in timely shipment of apparel items as they will not get raw materials from the spinners, Chowdhury told The Daily Star by phone.

â€œI incurred $3 million in losses over the last seven days due to the production suspension. The aggregated loss would be higher as almost all factories in these industrial belts have stopped production,â€ he added.

Faruque Hassan, managing director of Giant Group at Shafipur, echoed the same, adding that the workers are sitting idle.

â€œI am running my knitwear factory with the raw materials that were previously stocked,â€ said Momin Mondol, managing director of Mondol Group in Konabari area in Gazipur district.

â€œSince I have to maintain a strict lead-time, I spoke to my buyers and they agreed to use fabrics from other factories and I am doing so now. But how long will I run my factory like this?â€

â€œWe are in the process of nominating contractors to repair the pipeline. It will take two to three weeks to repair the line,â€ Rahman told The Daily Star by phone.

Before the completion of the repairs, the industrial units will be provided with gas by suspending its supply to fertiliser companies, he said.