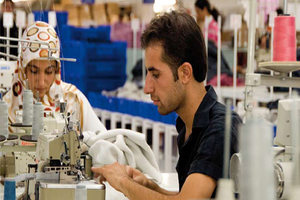 Turkeyâ€™s textile industry foresees weaker demand in the domestic market as rising costs will push prices higher, but hopes to boost exports this year. Turkey is the seventh largest textile and textile raw materials supplier in the world. According to Ahmet Ã–ksÃ¼z, the head of the Istanbul Textile and Raw Materials Exporters Association (Ä°THÄ°B), the textile industry will also target the South American and Far Eastern markets.

He said that, â€œMany textile firms, which want to avoid risks stemming from the expected contraction in the domestic marker, are increasingly focusing on exports. The costs in the industry are indexed to foreign currencies thus companies experience hardship when currency rates rose.â€ Ã–ksÃ¼z also noted that 314 member companies of the association exported their goods for the first time in 2018. Also, â€œLast year, Turkish firms shipped goods to a total of 188 countries, but the EU remained the largest single market with $5.4 billion in export revenues. Exports to Russia, meanwhile, soared 107 percent and sales to Belarus jumped 43 percent. Exports to Portugal saw a 26.3 percent increase.â€

â€œThe overall costs of the firms operating in the textile industry have increased by 30 percent over the past one year due to the rises in energy costs and minimum wages as well as exchange rates. Those cost increases will be reflected onto prices in the coming months,â€ said Ahmet Ã–ksÃ¼z, the head of the Istanbul Textile and Raw Materials Exporters Association (Ä°THÄ°B). He said that, the expected price increases will translate into a contraction in the domestic market.

â€œThis contraction will be felt particularly in the first half of the year, but the industry will see double-digit growth in exports,â€ he said. Exports of the textile and raw materials industry increased by 4.5 percent in 2018 from a year ago, hitting $10.5 billion. â€œOur target for 2019 is to generate more than $11 billion in export revenues. We expect to boost exports in 75 percent of our markets. The industryâ€™s three largest export markets are Germany, Italy and the U.S., while 50 percent of exports go to the EU,â€ Ã–ksÃ¼z added.