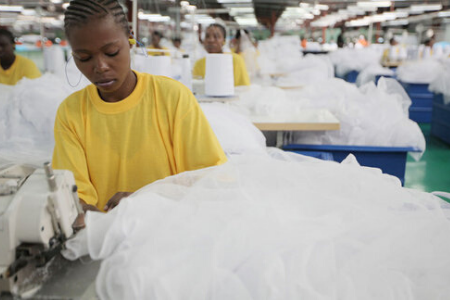 Tanzania aims to uplift the textile sector at CIIE

Tanzanian authorities said the east African country was looking forward to promoting trade at the second China International Import Expo (CIIE) which is being held through Sunday in Shanghai.

“For Tanzania, the expo is going to be a showcase of what we can trade with China and other participating countries,” the Minister for Industry and Trade, told Xinhua in an interview on Thursday.

Bashungwa, who is leading Tanzania’s delegation to the expo, says the event will also enable the country to promote investments in agriculture, mining and fisheries sectors.

The minister thanked China for giving Tanzania a special place at the international expo.

“We will use that special space to make sure that the Tanzanian story is well featured and presented to countries which will participate in the expo.”

He said Tanzania benefited from the first CIIE held in 2018 by recording a growth in the number of tourist arrivals from China to Tanzania.

“We have made good progress in the tourism sector,” he said.

Tanzania wants to get the needed capital to existing businesses and also the knowhow and the technology to transform the business operations, he said.

The minister encouraged Tanzanian business executives to take advantage of what the Chinese businesses can offer by looking into forming joint ventures not only for capital mobilization but also for technology.

He said Tanzania intended to increase cotton production from the current 350,000 tonnes a year to 1 million tonnes annually in the coming five years.

He added that the Chinese investors can invest in the production of yarn to supply to garments and clothing factories which are already in Tanzania and those in other countries.

“The government is looking forward to providing incentives to investors in the textiles factories,” he said, adding that Tanzania also intended to double production of coffee from 50,000 tonnes to 100,000 tonnes annually in the next five years.

He said China is becoming increasingly open to trade with the world, adding that the forthcoming expo is one of the ways of opening to the world to increase trade.

“So for us, we think this is an important expo because it connects China with the rest of the world,” he said.

According to the Chinese Embassy in Tanzania, China has been the largest trading partner of Tanzania for three consecutive years. In 2018, bilateral trade between the two countries reached about 4 billion U.S. dollars.