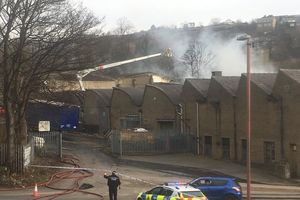 The owner of the Milnsbridge textile factory that ignited into a huge fire has said he is determined to rebuild his company. Ian Potter owns textile recycling company, Multi-Fibres Ltd, which has a plant on Dale Street in Cliffe End Business Park. He got a call at 6.30am on Sunday from a friend who owns a neighbouring unit to tell him his factory was on fire. Ian, 51, arrived at the scene to find huge flames had engulfed a 50m by 10m building used by Multi-Fibres Ltd. Ten fire appliances from all over West Yorkshire were scrambled to the scene as firefighters battled to contain the blaze.

"It's a shock," said Ian, who lives in Ossett. "That part of the building is going to have to be demolished. "I've been in that business and on that premises for 24 years. It means a lot to me, it employs a lot of people. My sister and brother have worked there the whole time. "It wasn't just a job, it meant a lot more to me." Ian said he has resolved to rebuild his business though. "We've got to try and rebuild Multi-fibres now," he said. "It's the only way. It could have been a lot worse. The fire brigade did a great job."

When Ian arrived at the factory at around 7am, the fire was well on its way to spreading to an adjacent building that makes up the rest of his plant. "If that had gone I'd probably be out of business now and a lot less positive. "The fire service saved that building and my business. "The fire had got hold, it had really got hold and attached itself to that building but the firefighters managed to turn it back. it was really touch and go for a while.

"I can't thank them enough." The fire was brought under control by 9am but fire crews remained on the scene to dampen down the smouldering building.

Watch Commander Robin Ferguson explained, "â€œThe fire is now reduced dramatically due to the hard work of the crews. â€œWe will maintain a presence there over the next 24 hours, dampening down and making sure it is totally under control. At the moment there are eight pumps still there and they will be dwindled away gradually." The cause of the fire is as yet uncertain. Fire investigators are currently working to determine how it started.