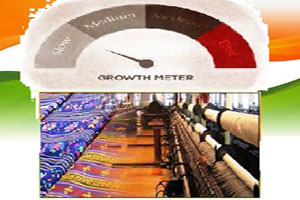 Sluggish global demand and declining competitiveness is likely to see less of export in 2014-15 for the textile and clothing (T&C) sector. According to industry sources, it should be five percent.

On a stand-alone basis, though, apparel export is expected to show 10-13 percent growth. However, this would be the lowest in recent years.

According to experts there are several reasons for the subdued growth, also likely in 2015-16 if the current situation persists.

According to the Apparel Export Promotion Council, garment exports will continue to grow at a little over 10 percent, perhaps 10-13 percent.

D K Nair, secretary general of the Confederation of Indian Textile Industry said that there are several export-related incentives the industry has been demanding from the government. For next year to be better, the government will have to take steps to incentivize textile and garment exports further.

K Selvaraju of the South Indian Mills Association is of the view that almost the entire value chain, barring garments are witnessing a lower trend in export growth. For instance, the cotton yarn has an export capability of 140-160 million kg but it is seeing 110-120 mn kg only.