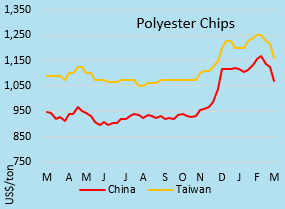 Ethylene prices declined sharply in the first week of March in North East Asia as demand dropped for downstream styrene monomer while other derivatives like PE weakened significantly. In US, ethylene spot fell on longer supply as Formosa Plastics Texas unit returned from turnaround while February contract was settled higher on the month. European ethylene market was bullish as material remained tight amid firm demand remains.

Paraxylene prices declined in Asian markets amid weakness in both up and downstream sectors. In US, paraxylene spot was down as mixed xylene slipped with length in market. European paraxylene contract price for March was fully settled at a roll over while spot declined on the week.

MEG prices dived in Asian markets on urgent sales with sellers lowering offers to avoid incurring port costs. In China, port inventories continued to swell while supply in domestic market was abundant this week. European MEG prices also fell as demand softened and March contract price settling at a rollover, thus ending the huge price increases. US MEG prices retreated from their 21-month pushing the assessment of its highest level since 2 July 2015.

PTA prices slipped due to falling futures on Zhengzhou Commodity Exchange. In China, domestic market was corrected in a narrow range but was under recovery based on support from spot prices and the need to replenish inventories by end users beginning of March. In US, February PTA price remained unsettled while European February contract price was assessed stable as paraxylene contract price rolled over. Polyester chip prices inched down amid demand weakness although enquiring and trading was modest.

PSF prices moved down further in China with raw material costs dropping continuously while they remained stable in India and Pakistan.

PFY prices declined in China while they rose in Pakistan on rising cost in past week. In China, soft corrections in PTA and sharp fall in MEG prices drove players on the sidelines, seeing some sellers revise their offers lower amid thin liquidity. In Pakistan, selling indications for DTY yarns were heard revised up. In India, POY offers were generally held stable amid thin spot trades as downstream buyers purchased on a need basis to maintain production.