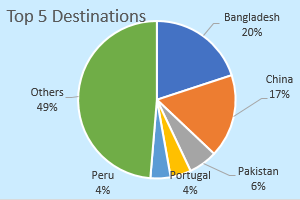 With Indian yarn imports declining significantly in China, Bangladesh emerged as the largest importer of spun yarns in terms of value in March. Bangladesh imported spun yarns worth US$40.19 million while China imports were worth US$34.40 million during the month.

In March 2017, 83 countries imported spun yarn from India, with Bangladesh at the top accounting for 20.24 per cent of the total value with imports plunging 41 per cent in terms of volume YoY and declining 32 per cent in value YoY. China was the second largest importer of spun yarns in March and accounted for around 17 per cent of all spun yarn exported from India. Export to China were down 65 per cent in volumes and 59 per cent lower in value.

Pakistan was the third largest importer of spun yarns, which saw volume rising 3.1 per cent while it was up 4.6 per cent in value. These three top importers together accounted for around 44 per cent of all spun yarns exported from India in March.

Cotton yarn was exported to 71 countries with Bangladesh as the largest importer from India in March, followed by China and Pakistan. The top three together accounted for more than 49.35 per cent of cotton yarn exported from India.

Brazil, Dominican Republic, United Arab Emirates, Jordan and Madagascar were among the fastest growing markets for cotton yarn, and accounted for 3.47 per cent of total cotton yarn export value. Eleven new destinations were added for cotton yarn export, of which, North Korea, Chile, Oman and Austria were the major ones.

Eight countries did not import any cotton yarn from India, including Venezuela, France, Norway and Sudan. They had imported yarns worth US$1.25 million in March 2016. In March 2017, significant deceleration was seen in export to Bahrain, New Zealand, United Kingdom, Romania and Greece.