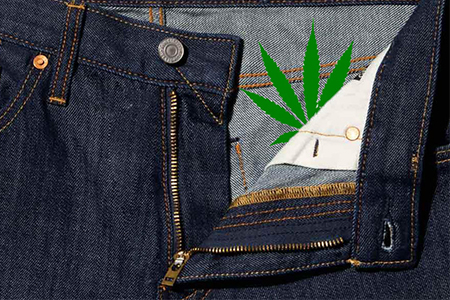 Irrespective of the variety of styles and trends the fashion industry shifts into every wardrobe has a pair of jeans. It takes about 7,600 liters of water to manufacture one pair of cotton jeans. As sustainability helps consumers have a guilt free shopping experience the CanvaLoop company joins the frame. The company has released jeans made out of Himalayan hemp.

Shreyans Kokra the CEO of the start-up said that having come from a family of four generations now, He has always been inclined towards the sustainable side of things. The 26 year old was also responsible for initiating Enigma Fabric back in 2017 when he was pursuing his masters in Babson College. The company has gone through many name changes hence and is known as CanvaLoop today. He explained how the developed technology utilizes the hard bark of the hemp plant and converts it into a cotton-like fiber which is then spun and transitions into the fibre. He stated that this is later spun into fabric and stuck into slow jeans.

They have obtained a patent for their product. The Himalayan hemp grows in the wild and has been in various parts of the Himalayan region for over 5000 years now. This hemp doesn’t require any form of human intervention and has been self-sufficient. Once it is harvested it grows back within 90 days. It is antimicrobial by nature and its porous property ensures the breathability of the fabric. The company claims that would last three to four times longer than an average pair of jeans.

The challenge faced by the Himalayan hemp was its extraction and harvesting which is an extremely skilled process. The hemp is collected in Nepal and later brought to Surat where most of the processing happens. With the assistance of their partners, they convert the materials into yarn and fabric on pre-order bases.

The company stated that they have prototypes of the jeans in three colors, black, indigo and sky and are ready to launch the Kickstarter campaign on September 10 through which people can purchase jeans. Shreyan explained that the cannabis cultivation was only legal in Uttarakhand and the campaign was a case study to prove that this model can be replicated in other Himalayan territories. He believes that if the campaign becomes a success, then manufacturing there would solve the mass migration hindrance.

The company also wants to make fabric from nettle, kenaf and banana. They aspire to be a huge sustainable fabric brand.