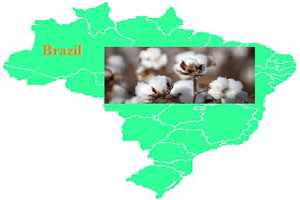 Brazilâ€™s 2017-18 cotton output may reach 1.69 million tons, 10.5 percent larger than in the previous crop, due to the good perspectives for the Brazilian market, according to third crop survey on December 12 released by the National Company for Food Supply (Conab). As per the survey, the area sown with cotton is forecast to reach 1.04 million hectares, an increase of 11 percent; however, average productivity is expected to be 1,622 kilos per hectare, a slight 0.5 percent down compared to the 2016-17 season.

According to data from Conab (National Company for Food Supply), the year of 2017 starts with inventories at only 162.9 thousand tons, the lowest level since 2010/11.

In Mato Grosso, the main and largest cotton producing state in Brazil, the 2017-18 harvesting is estimated at 1.06 million tons, 5.2 per cent above the previous one, according to Conab data. The area sown may increase 3.3 per cent, reaching 648,500 hectares, while the average productivity may rise 1.8 per cent, to 1,611 kilos per hectare. Higher productivity is linked to favorable weather.

According to Center for Advanced Studies on Applied Economics (CEPEA) in its latest fortnightly report on Brazilian cotton market stated that only a few processors and traders were active in the spot market, searching for batches for quick delivery â€“ these agents were flexible regarding asking prices, even for lower quality batches. Most contracts closed involved small volumes to replenish inventories and speed up loading before transportation stops, due to the holiday season.

Cotton prices increased in Brazilâ€™s domestic market in the first fortnight of December 2017. The CEPEA/ESALQ cotton Index between November 30 and December 15 rose a staggering 6 percent, closing at 2.5945 BRL ($0.7848) per pound on December 15.

Most growers and trading companies continued being retracted from sales in the domestic market, agents were focused on oscillations of future contracts at the New York Exchange Stock (ICE Futures) and the exchange rate (real x dollar). However, some export contracts were closed, mostly involving the 2017-18 crop. Dollar will play an important role to keep cotton availability adjusted to demand, mainly in the second semester of 2017.