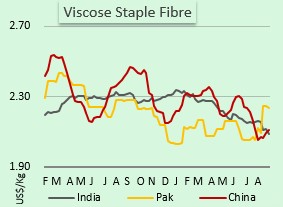 Offers for medium-end VSF in China was down US cent 1 a kg in the week ended 28 September 2018 and high-end fell US cents 2 a kg on the week. In spot, 1.5D VSF was up US cent 1 as compared to last week while 1.2D was largely stable on the week.

Viscose staple fibre prices were range-bound in the Asian markets of China, India and Pakistan during the week. In China, VSF offers generally were stable-to-up in the week underpinned by firm pulp prices. Market sentiment was seen improving slightly as downstream markets replenished stocks for the holidays.

Major VSF producers had agreed during the week to maintain the prices in the short run, with plans to hike prices after the National Day holidays. As a result, market confidence recovered after this news and downstream mills started to replenish some volumes.

In Pakistan, 1.5D VSF prices were unchanged on the week in Karachi market.

In India, VSF prices rolled over in local currency while they fell US cents 4 a kg in US$ terms during the week.