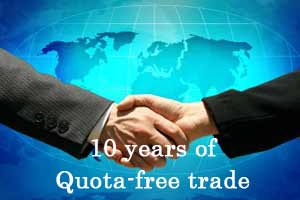 Since the 1970s,restricted by the Multi Fibre Agreement, the global textile and clothing (T&C) market had been subject to a protectionist regime as advanced countries shielded their domestic textile industries from cheaper imports.
However, a new era started after the WTO Uruguay Round in 1994, as the General Agreement on Tariff and Trade (GATT) sought to gradually phase out quotas over a ten-year period. Finally, 1 January, 2005 marked the beginning of a new era for the global T&C market as developing nations could freely access the main markets of industrialized and developed countries.
Quota free regime: Opening a window of opportunities and challenges
Quota elimination ushered in a world of opportunities, but also challenges for developing countries who had long lobbied for a quota free world.
"Abolition of the quota system will be a turning point for the textile industry in India. The company has taken all steps to move up the value chain and supply garments to international customers," said Arvind Mills Director & CFO Jayesh Shah in December 2004, just at the cusp of quota-free regime.
China's textile trade was expected to dominate the global T&C market with fears that its cheap imports would flood the US markets. China's share in the US market was set to rise to nearly 50 per cent from the then 16 per cent.
"China would flood the US textile and apparel market once quotas were removed," said Guilford Industries' CEO John Emrich in March 2005 just after the introduction of quota-free regime.
In the tenth year – the picture today
Export trends of developing economies
A quota-free regime paid rich dividends for Asian economies as T&C exports rose at a rate of 8 per cent per annum, from US$76.3 billion in 2004 to US$138 billion in 2012. In comparison, growth was pale in Latin America and Africa that lost out in the changed scenario. Asia’s share in global textile exports climbed from 22.6 per cent in 2005 to 27.4 per cent in 2012, while that in clothing export jumped from 29.67 per cent to a whopping 60 per cent as low-cost Asian producing economies thrived under a free trade regime.
China's exports boomed after quota removal
Chinas T&C exports more than doubled from US$115 billion in 2005 to US$255 billion in 2012 as shipments to the EU and US increased, helping the country to register nearly 10 per cent annual growth in the decade. Low cost of production and surplus labour made China the leader in the global T&C market as Chinese exporters flooded markets of industrialized nations with cheap goods following the end of the quota removal.
As the exhibits show, both China and India, two key low-cost T&C exporting countries, registered impressive gains in the seven-year period, 2005-2012 (Exhibits 1 and 2).

India too benefited
India increased its T&C exports from US$16 billion in 2005 to US$40 billion in 2013, bolstering average economic growth to nearly 8 per cent during the period. However, exports fell in 2009 when the world was gripped by a financial crisis, resulting in tepid demand from advanced nations such as the US and EU.
Developed economies boost imports following quota removal
T&C shipments to the EU and the US increased as end to quotas meant no restrictions on cheaper imports, benefiting consumers who earlier had to shell out more on high cost domestically produced goods (Exhibits 3 and 4).

Impact of expiry of quotas on Human Development
Ø Job loss in smaller countries- on the flip side, smaller exporting nations such as Nepal, Fiji and Maldives witnessed thousands of job losses as the quotas that earlier shielded them from large suppliers ended and factories faced a shutdown.
Ø American textile workers suffer- local US textile producers weren’t able to withstand competition from cheap imports, causing heavy job losses asmany factories were shut. Between 1994 and 2005 when the gradual phase-out of the quotas was announced, the US textile industry lost 900,000 textile and apparel manufacturing jobs.
Ø Low wages in developing countries despite robust export growth- despite a rise in exports following quota removal, textile workers across South Asia including India are poorly paid. Workers in Bangladesh have the lowest pay in the world with the current minimum wage at about US$68, a month.
Impact of quota removal on competition, anti-dumping
The end to the quota regime increased competition in the global T&C market. Only countries which had a competitive edge were able to survive. With a strong manufacturing sector and highly skilled but low cost labour, China outpaced other Asian peers. In the labour-intensive textile manufacturing segment, India, Pakistan and Bangladesh have performed well in the past decade.
Imposing anti-dumping duty on suspiciously low priced imports has been another fall-out of a quota-free regime.  These countervailing duty trade remedies which were once a rarity against textiles and apparel trade when quotas ruled the market, have become quite common now. Anti-dumping is a modern day protectionist policy resorted to by industrialized nations to restrict cheaper T&C imports and protect domestic industry.
A decade after quota removal, large textile manufacturers such as China, Vietnam and India have remained under a shadow of anti-dumping investigations from developed markets such as the EU.
Experts reckon that China’s meteoric rise as a leader in the global textile industry, coupled with its status as a non-market economy may have been attributed to the large number of anti-dumping cases against the Asian powerhouse.
0 0 vote
Article Rating
Login
Please login to comment
0 Comments
Inline Feedbacks
View all comments