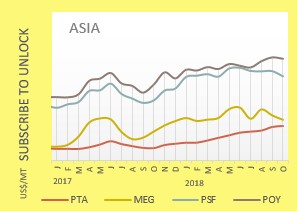 Polyester intermediate, purified terephthalic acid (PTA) prices in Asia fell in the week ended 16 November 2018 in tandem with weak paraxylene cost, however supply was relatively tighter in the week amid plant shutdowns.

The average plant run rate in China fell to 69% in the week. However, China's Honggang Petrochemical is planning to build a second PTA unit with 2.4m tons per year of capacity at its Lianyungang site.

Mono ethylene glycol (MEG) prices in Asian markets edged down in the week despite a sharp rise in ethylene cost. Prices were pulled down amid persisting weak market sentiment despite a decrease in supply during the week.

In US, MEG prices were steady during the week.