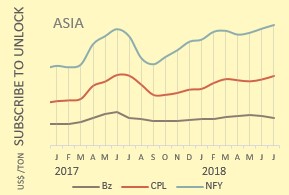 CPL offers in China were largely stable in the week ended 24 August 2018 as supply tightness was easing a bit due to increase in average run rates in the region during the week.

The SE and FE Asian caprolactum markers on the lower end were stable during the week. In China, spot CPL liquid good offers were up US$7 a ton due to strong local currency while solid goods also rose US$7 on the week. Sinopec kept its August contract nomination price at 16,800 Yuan a ton while Fibrant nominated its August contract price at 16,900 Yuan a ton for liquid goods.

Overall, CPL prices are likely to range-bound amid improved supply in coming weeks.

Bright conventional spinning nylon-6 prices in China rose US$51 a ton in the week ended 24 August 2018 while semi-dull high-speed spinning chip was up US$36 a ton as compared to last week.

Nylon chip prices in China climbed as trading activity improved slightly during the week. Producers were more active as they were able to make some profits. Downstream buyers still needed chips due to low feedstock inventory.