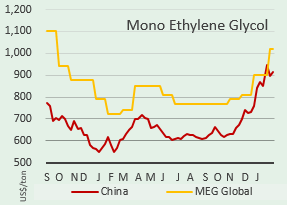 MEG price declines due to bearish sentiment in Asia

Asian spot MEG fell US$10 a ton CFR China and CFR South East Asia In the last week of September. In China, offers for nearby-month cargoes were down US$10 a ton during the week. Mono ethylene glycol prices in Asia were assessed lower as upstream market weakened this week.

Prices were also pulled down due to bearish sentiment and offloading of cargoes prior to the Golden Week holiday in China. China’s Sinopec Yanshan Petrochem had planned to shut MEG plant on 9th October which has a capacity of 70,000 tons a year.

In US, MEG market was steady, but somewhat tight, due to average demand from the downstream polyethylene terephthalate sector, the regular flow of exports to Mexico and Asia, and a turnaround taking place. September contracts were assessed at an increase of 2 cents per pound from last month.

In Europe, mono-ethylene glycol spot prices continued on an upward trajectory that week, as there was going to be the 51st annual European Petrochemical Association meeting. MEG bulk spot prices increased by a larger amount than previous week.