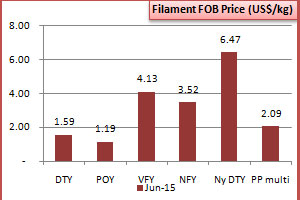 Close to 1 million kg of viscose filament yarns were exported in June to 25 countries from India valued at US$4.1 million. During the month, 184,000 kg of VFYs were exported to Japan which continued as the major importer, followed by Germany and Turkey.