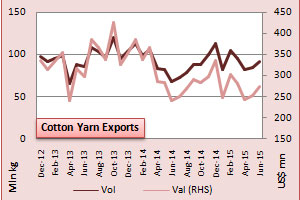 In June 2015, India exported cotton yarn to 72 countries with volumes at 92 million kg which was worth US$275 million (INR1,740 crore). The average unit price realization was at US$2.98 a kg, down US cent 1 from previous month and US cents 54 down from the same month a year ago. The largest importer of cotton yarn from India was China, followed way behind by Bangladesh and Egypt. The top three together accounted for more than 60 per cent of cotton yarn with combined volume at 60 million kg worth US$170 million.

Cambodia, Bulgaria, Australia, Eritrea, Chile, Slovakia, Mexico and Hungary imported yarns worth US$0.90 million in June 2014, however, these markets did not import any cotton yarn from India this June. Also, imports from Turkey, Kenya, Czech Republic, Algeria and Venezuela this June were significantly declined.