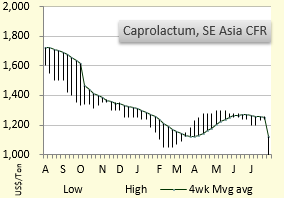 Asian markers, the SE and FE were up US$10 a ton in the first week of July. In China, offers for liquid spot were up US$20 a ton while solid goods offers rose US$5 a ton.

Caprolactum prices edged up that week on moderate demand amid tight supply and on back of recovering raw materials market. Spot offers for liquid and solid goods were hiked in China while contract nominations for July were raised by major producers.

Sinopec raised its July nomination which was up US$5 a ton for liquid goods. Fibrant has decided to shut its caprolactam facility in Augusta, Georgia, due to low prices and unfavourable market conditions.

Meanwhile, European June contract price was settled at rollovers to decreases, while focus was now on July negotiations following the increase in benzene cost.