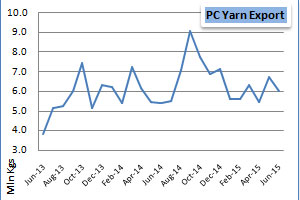 Export of blended spun yarns aggregated US$30.6 million in June, 7 per cent YoY while volumes gained 3.7 per cent at 10.4 million kg. In June, 6.0 million kg of PC yarns worth US$16 million and 3.3 million kg of PV yarns valued at US$9.2 million were exported.

Egypt was the largest importer of PC yarn from India in June but reducing its intake followed by Turkey, in the 49 countries that imported PC yarn from India. The fastest growing markets for PC yarns were Sri Lanka, China, South Africa, Italy and USA while Saudi Arabia, Russia, Thailand, Poland and Bahrain significantly reduced their import of PC yarns from India. Tunisia and Syria were among the 12 countries which did not import any PC yarns from India in June. Fourteen new markets were found in June, of which, Honduras, Guatemala, South Korea and Ukraine were the major destinations.

In June, US$9.2 million worth of PV yarns were exported from India with volumes at 3.3 million kgs. The largest importers of Indian PV yarns were Turkey and Pakistan in June with total volume at 1.90 million kg worth at US$5.22 million. Morocco and Tunisia were among the 6 countries which did not import any PV yarn during the month, however, Kenya was the new major market for Indian PV yarn in June.