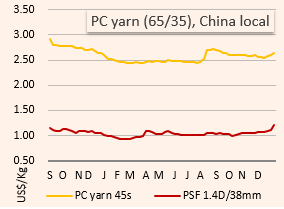 Blended yarn markets in Asia were mixed as some spec prices inched up while others rolled over in China, India and Pakistan. In China, blended yarn producers were not been able to raise prices in line with the higher material costs, implying decline in their margins.

PSF prices have jumped to higher levels while VSF in contrast, prices are now returning to lower levels after a short-lived attempt to raise prices.

In Pakistan, PC yarns have risen for specific counts although market activities remained weak by a lower level of fabric sales on the Faisalabad. Prices have also not been raised on the export market, due to a weaker activity. 20s PC (52/48) carded yarn prices regained up US cent 1 a kg on the Faisalabad market while 30s were flat on the week. PV 30s yarn prices were steady during the week.