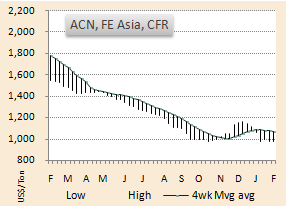 Acrylonitrile prices in Asian markets were flat to lower week on the week amid thin activity and ample cargoes which Chinese market was closing for a long Lunar New Year holidays.

Prices also fell as many buyers in key markets like China had withdrawn their inquiries and retreated to the sidelines, ahead of the Lunar New Year holidays.

In US, acrylonitrile spot fell tracking global markets while talks mainly hovered around last week’s level, with some discussions heard to be higher. Acrylonitrile export assessment was flat during the week.

In Europe, acrylonitrile spot prices were down on the week as buyers moved on to the sidelines an February contract price for propylene was down on the month.

European acrylonitrile prices were assessed down US$35 a ton CIF Mediterranean on the week.