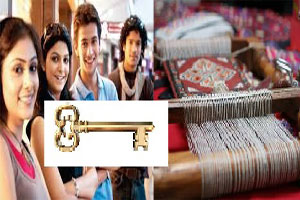 The Government had always been keen in the promotion of handloom textile. As one of the major steps regarding the same, a discussion on revival of handloom, with particular focus on increasing earning of handloom weavers, was held according to the statement of the Textile Ministry.

The meeting of the panel comprising stakeholders from government, industry and members of the civil society was organized on May 17 by the office of Development Commissioner (Handlooms), Ministry of Textiles.

Textiles Secretary S K Panda stated at the meet that Youth, fashion and technology hold the key to the future of handloom. According to PTI, Panda asserted that concern for the handloom weavers should guide all interventions of state and non-state actors.

He outlined the context in which the handloom weavers operate, and the various policy interventions that Government has been making in order to improve the earning of handloom weavers.

Textiles Ministry has said steps are underway to revive handlooms and a panel has been deliberated on the issue including aggressive marketing, design innovations and popularizing handlooms among youth to increase the income of weavers