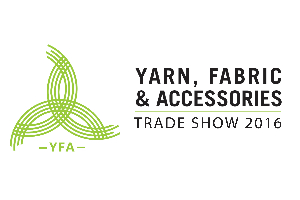 A clutch of several Chinese exhibitors will set up stalls showcasing yarns, fabrics and garment accessories at a special Chinese Pavilion at the upcoming second edition of the Yarn, Fabric & Accessories Trade Show (YFA) Show which will run from November 23 (Wednesday) to 26 (Saturday), 2016.

YFA 2016 aims to redefine the way fibres, yarns, fabrics and apparel accessories are sourced and bring renowned suppliers from these four segments closer to buyers and also offer buyers a one-stop place to source all their requirements.

YFA 2016 which will feature products beginning right from fibres to yarns to fabrics and finally accessories will see exhibition space doubling from one hall to two halls. Additionally, WGSN, the global authority on fashion trends will be the Trend Partner and will also be putting up a Pavilion.

There were more than 100 exhibitors in the 2015 edition, which was visited by more than 7,477 visitors. For the 2016 show, the organizers expect over 250 brands from several countries and more than 15,000 visitors, who too are expected from 15 countries.

Their optimism stems from the fact that with still four months to go, 75 percent of the space has already been booked and at the same time several exhibitors who exhibited at the 2015 show like Indorama Synthetics Limited from Gurgaon, TT Ltd. from Delhi, Asahi kasei Fibers from Japan, Soundararaja Mills Limited from Dindigul, Nahar Industrial Enterprises Limited from Ludhiana, Sanathan Textiles Pvt. Ltd. From Mumbai, Nimbark Fashions Limited from Mumbai, Madeira India Pvt. Ltd. from Gurgaon, Uflex Limited from Noida, Mahamantra Impex from Surat, Crystal Collections from Delhi, Nilesh Ribbon Industries Pvt. Ltd from Surat, B K Jari Manufacture from Surat etc are returning for the 2016 show.

Vision Communications has also planned fashion shows during the days of the show and additionally there will be a high-level conference which will see ministers, top government officials and industry leaders offering their views at the conference.

Speaking about his experience at YFA 2015, Mr. Pankaj Bhardwaj, AVP (Yarn Marketing), Nahar Industrial Enterprises had said, â€œOur experience has been fantastic at this show, as we have met all types of customers like buying houses, exporters, domestic buyers, knitters, etc, which includes existing as well as new buyers.â€

â€œWe are sitting at the top of recession, but this show which has all three categories like yarns, fabrics and accessories will surely give a boost to the industry. Though this is the first edition, the organizers have worked hard to make it successful,â€ he added.

Mr. Mahesh Maheshwari, Director, Nimbark Fashions Ltd had remarked, â€œThe YFA show has been very good for us and although the show is being held for the first time, we are satisfied with quality and number of buyers and also the way the show has been organized. We have already booked space for the next year's edition.â€

German embroidery threads maker Madeira Indiaâ€™s Sales Director, Mr. Akshay Kumar had stated â€œThe response to our products has been unexpected and has exceeded my expectations. We have had quality buyers visiting our stall. Going by the response at this edition, we would definitely like to return next year.â€