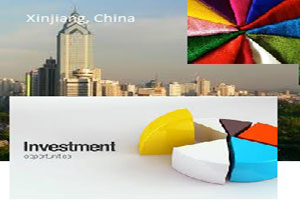 An 110,000-spindle plant backed by investment of 350 million yuan ($57 million) kicked off construction in Hutubi county. It is the third plant Henan Xinye Textile Co Ltd will have established in Xinjiang in the past 12 months. The three plants will employ 3,000 people in 3-5 years.

Understanding the potential for cotton production in Xinjiang and the vast market in central Asia, the company purchased a bankrupt textile company in Hutubi county last January.

Luo Rongqing, deputy general manager of Xinjiang Yuhua Textile Technology Co Ltd, the local joint venture said that by the end of this year, the company, which is among China's top 20 textile manufacturers, will have 550,000-spindle production capacity and an output value of 2 billion yuan in the region.

Luo attributed the boom in textile investment in Xinjiang to the preferential policies offered by the central and regional government.

Pan Zhiping, a professor with the Central Asia Research Institute of Xinjiang University said that Xinjiang is the gateway to middle and western Asia but had no strong industries to support development in the past, which hindered its leading role in the Silk Road Economic Belt, a China-proposed initiative to boost cooperation with Central, South and West Asian countries.

The support from the central and regional governments will make the cotton-rich region a major textile and clothing manufacturing base, which will create hundreds of thousands of jobs and will be a boon to the underdeveloped region.

According to a guideline issued on Thursday by the State Council, China plans to make Xinjiang a major textile base by 2020 to facilitate exports to its western neighbors.

Luo added that a ton of yarn costs 3,000 yuan less in Xinjiang. Together with the tax and electricity cuts they will make 4,000 yuan in profit on a ton of yarn.

In northwest China, home to more than 22 million people of 47 ethnicities, Xinjiang now produces about 60% of China's raw cotton, but most textile companies are in eastern coastal areas, far from Xinjiang.

Xie Qing, deputy head of the regional commission of economy and information technology said that, Xinjiang's textile industry,boosted by preferential policies, is profitable and is attracting investment from eastern regions.

In the first four months of this year, the fixed asset investment in the textile and clothing industry reached 1.28 billion yuan in Xinjiang, up 75.5 percent year on year. According to the commission, the sales-output ratio stood at 94 percent during the same period.

More and more textile manufacturing companies are moving to Xinjiang Uygur autonomous region, in the far west of China, as support for the industry in the region is stepped up.