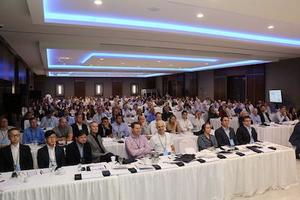 Honduras-based UTEXA is a new $73 million man-made yarn company that began operations in 2018. Founded with the goal of bringing enhanced competitiveness to the Central America Free Trade Agreement (CAFTA-DR) region, UTEXA was made possible through the combined vision and efforts of its investors, market opportunities and the Honduras 2020 country development program, a private sector initiative complemented by the public sector that was developed to grow the country both socially and economically.

The CAFTA-DR region is again undergoing huge progress and opportunity in the textile and apparel sector, much like the opening growth that was experienced following CAFTA-DRâ€™s passage in 2005. However, unlike the initial boom, current now is hugely driven by speed-to-market and the availability of value-added products and not by low-cost production.

UTEXA is one of the most advanced man-made yarn production facilities in the world, featuring all new modern manufacturing equipment designed for highly efficient and flexible production. By expanding the available product range and lowering raw material input costs for the region, UTEXA has given additional incentive to enhance sourcing and near shore strategies within the CAFTA-DR region.

Apparel Summit of the Americas 2018 attendees had the opportunity to tour the new UXTEXA facility and learn about the plantâ€™s capabilities. UTEXA tours were a highlight of the Apparel Summit of the Americas. AAPN and Honduras Manufacturers Association came together to maximize synergies and gave UTEXA a tremendous opportunity to showcase a world class yarn operation to some of the most important textile executives in the CAFTA region.

The Apparel Summit of the Americas kicked off with an opening night reception at the Intercontinental Hotel. The summit attracted 250 AAPN members and prospective members from 125 organizations. Executives from 18 brands and retailers participated in the event to see firsthand the investments taking place in the Honduran textile industry. In addition, more than 40 volunteers from AAPN member companies and local organizations contributed to the eventâ€™s success.

On the first full day of activities, Jesus Canahuati, president of Elcatex, opened the conference held at the Copantl Convention Center. Canahuati touted Honduras as the number-one global destination for U.S. yarn exports, which amount to $1 billion annually. The country also is the number one country of origin for U.S. imports of cotton T-shirts and sweatshirts. Current strategic investments in the Honduran textile industry focus on man-made knits and other activewear.

The 2018 event featured a combination of conference speakers and tours of local production facilities. One tour highlight was UTEXA (United Textiles of America), a brand new man-made fiber spinning plant.

According to AAPNâ€™s Managing Director Mike Todaro, the event involved more planning, logistics and people than any previous event in AAPNâ€™s 37-year history. But the event was considered a success, so much so that AAPN plans to make it a biennial event. Jesus Canahuati, Elcatex; Joe Cuervo, Kohls; Juan Zighelboim, TexOps; and AAPNâ€™s Executive Director Sue Strickland got together to discuss an event that could showcase new investments taking place in Honduras, and the Apparel Summit of the Americas 2018 was born.

â€œIt was very meaningful for us in Honduras that AAPN chose San Pedro Sula to hold the Apparel Summit of the Americas,â€ said Mario Canahuati, president, AsociaciÃ³n HondureÃ±a de Maquiladores (AHM), the Honduras Manufacturers Association. â€œIt was a remarkable success for AAPN and an opportunity to showcase the progress, the investment and diversification that is taking place in the industry in Honduras, which â€” as well as other countries in the region â€” has a history of solid partnership with many of the companies that participated in the event.â€

Simon Mainwaring, founder of We First, a brand and leadership consulting firm, gave the keynote speech with a presentation that focused on purpose-based branding. Attendees were treated to a cocktail reception sponsored by UTEXA; in the evening. A fashion show featuring activewear produced by AAPN members based in the region; and dinner sponsored by FICOHSA at the Club HondureÃ±o Arabe.

The second full day of activities began with more organized plant tours and the attendees chose from visits to Genesis Apparel S.A., Elcatexâ€™s textile mill and Stretchline Central America S.A.; or a trip to Grupo Karimâ€™s spinning facility. The conference program picked back up that afternoon. Previous to the first presentation, Todaro presented the AAPN Apparel Industry Leadership Award â€” created to recognize AAPN members who have contributed exceptional leadership to the organization â€” to two individuals.

Jesus Canahuati, general manager, Elcatex, was recognized because â€œâ€¦ [he] presented Honduras2020 to the AAPN Annual Conference. This led directly to a joint venture of the UTEXA spinning operation and the 2018 Apparel Summit of the Americas. [He] has distinguished himself as a true leader of the Americas.â€ Industry veteran Joe Cuervo was the recipient of the second award. According to AAPN, â€œJoe began work in 2017 with AAPN on the 2018 Apparel Summit of the Americas during his time on staff at Honduras2020. Joe helped put together the agendas, tours, target lists, hotels, logistics and hundreds of other details. The summit success was virtually from his leadership.â€

Ed Gribbin, CEO, Gribbin Strategic LLC, and senior advisor to Alvanon, focused on trends and changing consumer values leading to changes in the fashion industry in his â€œLeveraging the Americas â€¦ itâ€™s more than just geography,â€ presentation. Kurt Cavano, founder and president, GT Nexus (an Infor Co.), followed with his presentation entitled, â€œDisruptopia: An Overview of the Speed of Technology.â€ In closing, attendees were given a chance to talk about the event and voice their impressions.

One participant said that, â€œThe 20/20 summit was an eye-opening event,â€ Also, â€œItâ€™s exciting to see the heavy investment that companies are pumping into Honduras. The tour of the energy park and housing projects, Utexaâ€™s state of the art facility gave us more confidence to continue focusing our presence in Central America.â€

Greg Dorf, director of Global Sales, Indiana Knitwear said that, â€œI was excited to be part of the AAPN Honduras events which highlighted how companies are investing in region and looking toward the future,â€ Also, â€œWhat made this event different for me was having the opportunity to tour Utexa and the energy plant. I gained some great insights into the Utexa facility and how the spinning process works. It was also nice to learn about how the energy plant generates it power to support the manufacturing process.â€

AAPNâ€™s Managing Director Mike Todaro said that, â€œThis was the hardest event that AAPN has done, and hopefully, people will be talking about it for years.â€ At least until 2020 anyway, when AAPN hosts its next Apparel Summit of the Americas and gives the apparel industry another unique event to talk about.