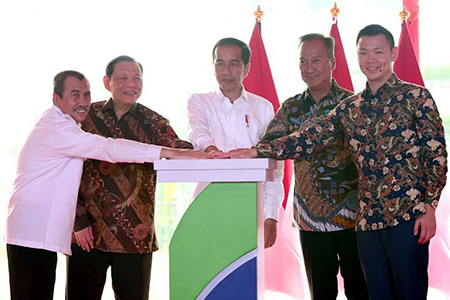 The APR facility has an annual production capacity of 240,000 tons. The inauguration ceremony included the signing of a plaque by President Widodo and the symbolic sealing by the President of an export container with 10,190 tons of viscose rayon fibre for shipment to Turkey, one of APR’s key export markets, and another 12,000 tons to Central Java.

The ceremony was also attended by the Minister of Industry, Agus Gumiwang Kartasasmita, the Minister of Trade Agus Suparmanto, the Governor of Riau, Syamsuar, RGE Founder and Chairman Sukanto Tanoto, and Anderson Tanoto, Director, RGE.

Speaking at the inauguration, President Widodo welcomed APR's investment in the development of the national textile industry. The role of the private sector was influential in driving economic growth, alongside the stimulus provided by the Government, he said. “Our garment industry should be greater than Vietnam. We already have our own raw materials here, such as viscose rayon, to support the industry,” he said.

APR’s business aligns with President Jokowi's vision to encourage more value-added investment in the nation and the strengthening of the national textile and textile product (TPT) industry, as set out in the Making Indonesia 4.0 Road map. In addition, the production of viscose rayon will reduce dependence on the import of textile raw materials, particularly cotton, to meet domestic demand.

Agus Gumiwang Kartasasmita, Minister for Industry, said: “By optimising the availability and use of raw materials originating from Indonesia, we can boost the performance of our textile sector. This is just one of several steps we are taking to continue to improve the performance and competitiveness of the labour-intensive industry.”

Basrie Kamba, Director APR, said: “The presence of APR will have a positive impact on employment and business opportunities for small and medium-sized businesses in the upstream and downstream sectors of the textiles and textile products industry. We are honoured and grateful to President Jokowi for inaugurating our new facility”.

In addition to Turkey, APR’s products are exported to 14 other countries including key textile centres such as Pakistan, Bangladesh, Vietnam, Brazil, and various parts of Europe. The products also support an expanding Indonesia fashion industry.

APR produces sustainable viscose rayon fibre from renewable, traceable and biodegradable raw materials. The company’s raw materials are supplied by APRIL Group, which is recognised as a responsible pulp producer through national (Timber Legality Verification System) and international (Program for the Endorsement of Forest Certification/PEFC) certifications.

APR is the first viscose rayon manufacturer in Indonesia to receive the internationally recognised STeP certification from OEKO-TEX, an independent Swiss-based certification organisation, for the responsible manufacturing of viscose staple fibre.

APR has launched the ‘Everything Indonesia’ campaign to promote the sustainable sourcing and production of fashion from Indonesia. The aim is to support Indonesia’s resurgence as a global centre for textile manufacturing and catalyse home-grown fashion design and creativity.

September 24, 2021
Wake Up Orange expands their sustainable anorak range
With the launch of 0.5B anorak in Wake Up Orange, Spinnova and Bergans are expanding their Collection of Tomorrow's