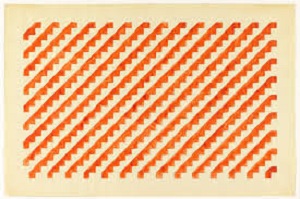 To see more of Girard, the first major Alexander Girard retrospective will be heading to Museum of International Folk Art in Santa Fe, New Mexico, in May 2019. Girard designed the patterns for different purposes. Plus and Step were originally created in 1960 as printed napkins for a restaurant in the Time-Life Building in New York City, while Check was a pattern made in 1956 for Georg Jensenâ€™s table setting. Circles, from 1952, and Edges, from 1962, were taken from a drawing and collage, respectively, and transformed into textiles.

Buried in the archive were five gloriously modern textilesâ€”Check, Circles, Edges, Plus, and Steps. Each of the fabrics has a colourful pattern that feel just as on point today as they did when he created them more than 50 years ago.

Alexander Girard was a man of many design talents. Trained as an architect, he practiced across disciplines making furniture, designing interiors, patterning wallpapers.

Girard is perhaps best known for his work as Herman Millerâ€™s head of textiles, a title he carried from 1952 to 1973. During that time, Girard designed hundreds of patterns, each with a refined eye toward pattern and geometry.

Five of those patterns are now being reissued as rugs by the textile company Maharam, and they include some long forgotten favourites. Working with Girardâ€™s grandchildren, Maharamâ€™s team uncovered the patterns during a trip to the Cooper Hewitt Design Museum a couple of years back.