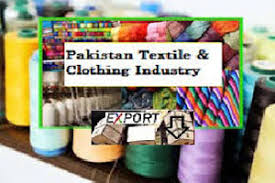 Pakistanâ€™s textile exports have been tapering off for the last four years, but an incentive package valuing Rs 180 billion, comprising rebates and tax concessions announced in January last year, bucked up exporters to contend for increase their share in the markets around the world.The exports should be regularly subjected to audit from third party to ascertain the use of imported inputs after one year. The bureaucracy should remain out of this process. All documented imported inputs used by this sector should be allowed at zero duty and consumption verified through exports. The ratio of each input used in garments and knitwear has already been calculated by the bureaucracy

Pakistan Bureau of Statistics data, released last month, showed countryâ€™s textile exports rose 7.2 percent to $8.79 billion during the first eight months of the current fiscal year of 2018 as value-added sector continued to post recovery in foreign earnings.Though, in February, textile exports ticked up 7.14 percent year-on-year, they went down 1.81 percent month-on-month owing to value-added sectorâ€™s failure to sustain the pace of growth in the month under review compared to January 2018.Textile exports, which make up around 60 percent of the countryâ€™s total exports, were recorded to be at $8.21 billion in the same period of the last fiscal

Pakistan is the only country in the region that has seen its total textile exports declining by 10 percent between 2011 and 2018.Other economies like China, India, Bangladesh, Sri Lanka and Vietnam have grown their exports at a compound rate of 20 percent or above during the same period.Vietnam, a relative newcomer, in the sector posted a compound export growth of 107 percent followed by Bangladesh with 61 percent. Pakistan predominantly being a textile export economy is struggling to keep the remaining share in global textile markets both in basic and value-added textiles.

It only toughens the competition from the other regional economies for products we produce. In other words we have left the field of blended products open for our competitors.The law allows import of blended yarn or fabric to be used for exports at zero duty but the procedures are so cumbersome that Pakistani apparel exporters are unable to avail this facility

The main reason is that they are small enterprises and cannot bear the burden of paperwork and corruption needed to avail this facility.Pakistanâ€™s basic textile is in tatters partly due to sectorâ€™s inability to upgrade and partly because of skewed government policies. Only prudent federal and provincial interventions can now help the sector spin back into action. The entire textile sector has grossly underperformed compared with its regional peers