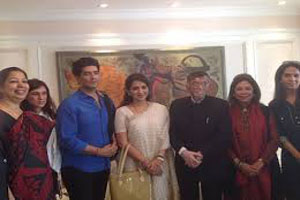 Textile clusters to be boosted by Indian fashion designers

Indiaâ€™s ace fashion designers in a meet with, Union textile minister, Santosh Gangwar are willing to lend their whole-hearted support to the government in setting-up robust design centres in the cluster area, and getting local artisans on board to deliver the product as per the designs.

The meet was focused on the need to give a boost to various textile clusters spread out across India. The designers are ready to extend their helping hand to traditional Indian textiles and handicrafts.

In fact, some of these designers are already working with artisans of Uttar Pradesh, getting on board with the centre's scheme would help them to streamline their own fashion label as well.

The group was led by BJP's spokesperson Shaina NC, herself a fashion designer, and included Manish Malhotra, Ritu Kumar, Reena Dhaka, Anita Dongre and Sandeep Khosla.The union textile ministry has decided to rope in ace fashion designers from Mumbai. The designers would also organize fashion shows to take the local art to the national and international level.

Shaina NC said that as of now they would be focusing on Uttar Pradesh and mainly Varanasi. They also wish to work with the local artisans to develop designs as per the market need and would help them to organize fashion shows and showcase their art on various platforms. But they are open to working as per the government's suggestions.

Designers like Sandeep Khosla, who is already working with Lucknow's chikan artisans, may be asked to work with the centre's project worth Rs60 crore at Lucknow to promote chikankari workers. Ritu Kumar, who is working with weavers in Varanasi, may be associated with the project in the PM's constituency.

The Banarasi saree is likely to be re-launched, after taking a fresh look at market demand and contemporariness of sari designs, by the union textile ministry on Flipkart. The September launch with the e-commerce firm, which was aimed to promote the Indian artisans across the world and helping them to get good prices, fell through due to few orders, admitted an official of the union textile ministry.