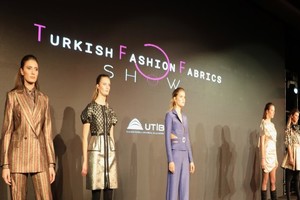 Speaking before the show, UludaÄŸ Textile Exporters Association Chair PÄ±nar TaÅŸdelen Engin said, "I'm so excited and happy tonight because this is the first time we are holding such an event. The textile industry is the most important sector for the Turkish economy. We export to more than 160 countries, and our current export value hovers around $2 billion a year. Tonight we are launching an image-boosting campaign with the Turkish Fashion Fabrics Show. We have prepared a short film that emphasizes our production quality, the power of our sector and our design skills by emphasizing the historical and natural beauties of Bursa. With this film, we hope to show our production potential and design power to the world."

The world premiere of a film on the collection and fabrics used by the four Turkish designers was also held at the pioneering event. The film will promote Turkish textiles and Bursa in advertorial and promotional campaigns abroad.

Among the guests were famous names of the fashion world, businesspeople and members of the press from around the world.

Engin pointed out that, as the third largest clothing supplier to the European Union and the world's seventh largest apparel exporter, Turkey strives to be a fashion hub at the center of three continents, Europe, Asia and Africa. With fast delivery, punctuality and high-class standards, Turkey stands out from its competitors by adapting to global trends and the latest innovations in the industry by producing environmentally cautious and eco-friendly products and switching to more sustainable processes in manufacturing.

Stating that the industry has shifted from low value-added commodities to high value-added manufactured items and fashionable goods, Engin said Turkey has and will continue to focus on qualified and educated human resources and investment in technology. Turkey is one of the world's biggest textile and apparel manufacturing countries and one of the select few countries that come to mind when one thinks of high-quality fabrics.

Engin said Turkey has achieved this by focusing on value-added products that highlight design and brand quality, which is a part of the country's strategy to boost exports.

Engin added that, "For example, instead of just exporting cotton or raw materials, we should focus on exporting technical fabrics such as breathable UV-resistant fabrics or athleisure garments.â€

Engin attributed this success to the hard work of small and medium-sized enterprises as well as large ones, modern and vertically integrated companies that are capable of producing and exporting their own collections.

Stating that thanks to itâ€™s excellent quality/price ratio, easy and clear export/import procedures, advanced production techniques and trendsetting designs, Engin said that Turkish textile sector export numbers were increasing each year. In October 2018, exports of textile products increased by 3.5 percent to $761.5 million compared to the previous month and increased by 6.2 percent to $8.5 billion in the last 12 months. In 2017, the sector exported $8.1 billion. Textile and apparel accounted for 9.4 percent of the country's exports in the first half of 2018. Industry leaders have also predicted around a 10 percent increase in exports for 2018 compared to last year.

Turkish Fashion Fabrics have been a critical source for major international labels, such as Hugo Boss, Michael Kors and Zara.

The top three markets for Turkish apparel products are Germany, the U.K. and the U.S., while Europe remains the most important market for Turkey's fabric exports, Engin said, adding, "We also want to increase our exports to Africa and the U.S. as they are very willing to work with us."

World-renowned Turkish designers like AtÄ±l KutoÄŸlu, Selma Ã‡elik and the creators of the brand Dice Kayek, AyÅŸe and Ece Ege, joined their fashion forces to showcase Turkish textiles to the world with their unique designs in the first event of its kind in Turkey last week.