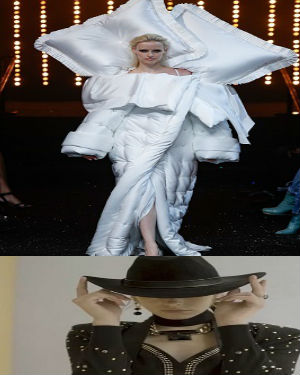 Spanish vibes by Elie Saab including the pillow dress

The pieces included the pillow dress from 2015, the 'NO' coat from 2008, the cutout ball gowns from 2010, and surrealist face dress from 2016. Saab's Spanish vibe collection comprised of dramatic sleeve design, "extending from a corset on the body to envelop the arm in a lattice-like structure, which called to mind the shapes on the face of the famous Catalan cathedral."

The night also had the Dutch duo Viktor & Rolf recreating past looks, with a retrospective of sort to celebrate the brand's 25th anniversary.

The Fall 2018 Paris Couture Week called off the curtains with some Spanish vibes by Elie Saab.

On the other hand, Viktor & Rolf, who have been responsible for some avant-garde creations over the years, went down the memory land and played their greatest hits, "with models taking the stage behind a dramatic red velvet curtain."