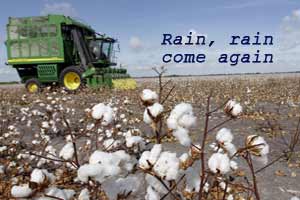 Widespread precipitation last weekend in US largest cotton growing region, Texas has raised prospect of a bountiful crop in the coming season. This has an adverse impact on cotton prices with the US cotton futures' benchmark contract falling on 16 June.

However, mill buying supported prices for the old cotton crop traded via the July contract on ICE Futures US which is due to expire on 9 July. The most-active December contract was bearish through the day, dealers reported.

Analysts observed that the new crop December was under some pressure as west Texas received beneficial rains over the weekend. The December contract hit a 3-1/2 month low of US cents 76.50 last week following a government report forecasting that US cotton inventory for the upcoming season will hit a 6-year high of 4.3 million bales (480-pound per bale). The report also said that world stock will reach a record high of 102.7 million bales by the end of 2014-15 season.

Meanwhile, the new cotton season 2014-15 started in Pakistan with some raw cotton reaching ginning factories of Punjab. Ginners are expecting factories to start operation during the week to start supply of new cotton crop to textile mills. As arrival gradually picks up, cotton prices are likely to decline in coming weeks.