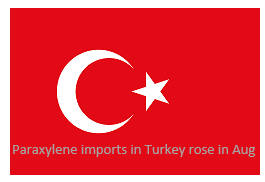 The increase was largely due to volumes inflow of 7,739 mt from Israel in August, whereas it had shipped none in the same month last year. Israel also retained the leading position among exporters in August, although it was largely unchanged from 7,732 mt in July.

Turkey's other PX supplier, the Netherlands, however had a monthly decrease in exports of around 13% to 5,199 mt in August, compared to 5,989 mt in July. August exports were also down from 5,984 mt twelve months ago.

Turkey is a net importer of xylenes, with negligible export volumes across all xylene isomers throughout the year, according to Turkstat.