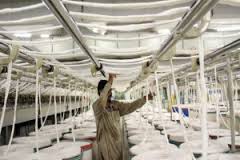 Pakistan - Textile Mill to shut down due to unfavorable market conditions

Due to unfavourable market conditions and continuous losses, another textile unit was shut down in Pakistan. Sajjad Textile Mills Limited, has announced its closure while 110 textiles mills have already closed their operations mainly due to increasing cost of doing business.

The company stated in a filing with the stock exchange that the board of directors of the company in its latest meeting had decided to suspend the manufacturing operations of the Company with immediate effect.

Sajjad Textile Mills reasoned that the company is going to close its manufacturing operations due to persistent unfavorable market conditions and continuous losses being sustained by the company.

The company is a spinning company and was engaged in producing high quality combed and carded yarn.

'In order to settle certain outstanding liabilities, the Directors proposed and approved to dispose off the machinery of the company in accordance with the prescribed procedure'. The company further informed its shareholders

It is important to mention here that the Sajjad Textile Mils limited, in a bid to deal with unfavorable business environment had installed new machinery last year in Card, Drawing and Ring Departments.

Muhammad Asim Sajjad, CEO said the disparity between cotton and yarn rates, mainly attributable to unplanned influx of yarn from India, along with increased energy cost compensated the management's efforts in terms of numbers.

The Company incurred Rs 193 million losses in nine months of current fiscal by the end of March 2016.

Reportedly, at least 30 per cent textile industry in Punjab has been closed down, as the cost of doing business in the textile sector has skyrocketed and the burden of incidental taxes, provincial cess, system inefficiencies and the punitive withholding tax regime have added fuel to the fire.

The All Pakistan Textile Mills Association (Aptma) Chairman Tariq Saud has claimed that at least 110 textile mills have closed down their operations in the last one year due to the high cost of doing business, particularly the cost of electricity and gas.

'The high cost of doing business has started hitting textile industry severely, as further closure of operations of the textile mills was reported to the association. "The current situation is fast getting out of control, which is quite evident from the free fall of exports over the last three months," he pointed out.