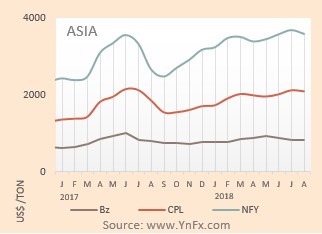 Nylon or polyamide chip prices in Asia rose in August 2018 supported by high caprolactum cost and tight supply while producers operated at high run rates to meet the demand during the month. Buyers followed up gradually and demand was seen improving. Offers for Taiwan-origin chips inched up 0.1% from previous month. In China, bright conventional spinning nylon-6 chips were priced at US$2,600-2,703, rose 4.8% from July while semi-dull chips were offered at US$2,712-2,776 a ton, up 0.4% on the month.

Caprolactum prices in Asia climbed in August on higher benzene market amid low inventory. In China, CPL offers were hiked as average plant run rates were slightly down during the month because few producers lowered their run rates, leading to limited availability in the region. Asian caprolactam spot prices jumped 1.5% from previous month. Sinopec released its August contract nomination price at US$2,455 a ton while Fibrant nominated its August contract at US$2,470 a ton for liquid goods.

Nylon filament yarn prices were range-bound in August despite rising raw material prices while demand was modest during the month. However, firmer chip market pushed up nylon yarn market by end-August. Production was slightly above break-even level. In China, semi-dull FDY70D/24F prices fell US cents 6 a kg from previous month while FDY40D were down US cents 7.

Benzene prices in Asia were assessed up during the month amid Chinaâ€™s ongoing trade war with the US. In US, spot benzene prices moved up amid strong downstream demand for styrene and phenol which counterbalanced the effect of lengthening supply stemming from higher refinery operating rates. In Europe, spot benzene prices declined this month. Asian marker, FOB Korea jumped 5.1% in August while US spot prices climbed 2% on the month. European CIF ARA prices slipped 1.6% while FOB Rotterdam was down 2.2% on the month.