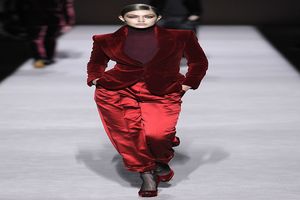 President of IMG Models and IMG Fashion Properties Ivan Bart said opening the week with the 11 HonorÃ© show, which is rooted in diversity, is meant to be a statement that resonates. â€œAmerican fashion sets the tone for style globally,â€ he said. â€œWeâ€™re seeing a new generation of young designers and entrepreneurs, and how they show and how they communicate is really the future. Theyâ€™re going to dictate, along with the consumer, how we all move forward.â€

Designers themselves have been called out for a lack of diversity on their runways. For seasons, The Fashion Spot has tracked the diversity of models represented across fashion weeks to show the progress, or lack thereof.

Patrick Herning, 11 HonorÃ©â€™s founder and CEO, said hosting a fashion show made sense to him, considering his background in experiential marketing. (He was formerly an executive at HL Group and launched influencer marketing consultancy PMH Partners.) He chose New York Fashion Week as the stage in order to grant the 11 HonorÃ© community an experience straight-size women have enjoyed for years and to show the industry what change is all about, in terms of diversity. He said that, â€œIn order for us to move the needle, we have to have more representation of all women on the runway.â€

Most of the models featured were curve models from IMG, including Precious Lee, Tara Lynn and Candice Huffine, who opened the show and is an 11 HonorÃ© investor. A runway producer backstage reminded all in the lineup to be â€œstrong, fierce, beautiful, feminineâ€ before they hit the runway to the tune of â€œGirls Just Want to Have Fun.â€ Trans actress Laverne Cox closed the show in a dramatic tulle gown.

Herning said that, as a startup, a show that was on par with others in the week would not have been possible without the partnerships that came into play: They included Shopify, which activated an on-site commerce experience, Shopbop, which provided the accessories, Chantelle lingerie and Bobbi Brown makeup.

â€œEverybody in retail should be looking at different ways in which to partner,â€ he said. â€œIâ€™m super proud of the role we play: Weâ€™re breaking down the barriers. With Shopbop, itâ€™s a retail-retail partnership! Itâ€™s like, â€˜Who gives a shit? Letâ€™s just all create some good.â€

When Herning launched 11 HonorÃ© with Vogue alum Kathryn Retzer (and support from VCs including Forerunner Venturesâ€™ Kirsten Green), around a dozen designers were on board. At the time, he shared that many designers were vocal about having no intention of extending their sizing. Now, 90 brands are sold on the site, and Herning said heâ€™s been turning away any that canâ€™t meet the retailerâ€™s current criteria: They must offer sizes through 20 and have plans to extend to 24 in the near future. (11 HonorÃ© declined to share sales figures.)

Outside of sizing, 11 HonorÃ©â€™s inventory â€” which includes styles by Brandon Maxwell, Jonathan Simkhai and Prabal Gurung â€” is driven by customer behavior.

â€œWeâ€™re 100 percent a data-driven company,â€ said Herning. â€œWe know whatâ€™s resonating, what price points make sense and what channels work.â€ Prior to fashion week, 11 HonorÃ©â€™s sales channels were confined to the website and direct sales via private events for executives and â€œpockets of wealthâ€ communities.

Along with driving brand awareness and facilitating a dialog about diversity, the show was expected to boost ROI, said Herning. Through Shopify, the go-to e-commerce platform for direct-to-consumer fashion brands, attendees could shop looks as they debuted on the runway by scanning QR codes in a lookbook found on their seats. Shopify is also sponsoring an 11 HonorÃ© pop-up selling the runway styles, which opened a few blocks away from the show immediately following it and will remain open through February 14.

For Shopify, the 11 HonorÃ© partnership was its first tied to any fashion week, though most of its clients are in the fashion industry, said Amy Hufft, Shopifyâ€™s vp of brand marketing. The company is using the pop-up component to promote its retail software and point-of-sale services, which are a newer focus.

â€œBetween the shop codes and what weâ€™re doing at the pop-up â€” everything from the backend inventory management to the actual hardware â€” this [partnership] showcases our full range of offerings and emphasizes the fact that we are not just about e-commerce,â€ said Hufft.

Made clear in the weekâ€™s opening show, New York Fashion Week producer IMG is hellbent on proving this season that the event is, indeed, a reflection of the times.

Owner and operator of New York Fashion Week IMG kicked off the fall 2019 season Wednesday night with a runway show featuring 11 HonorÃ©, an online retailer that launched in 2017 to offer top-designer fashions to plus-size women. The show was the first-ever at New York Fashion Week featuring a retailer, rather than a brand, plus it showed a diverse array of curve models (or those wearing beyond a sample size) and offered immediately shoppable styles.

July 6, 2021
Allbirds proposes 10 new sustainability commitments
As part of its continuous efforts to rescue the world, Allbirds, Californian footwear, and clothing company have

July 6, 2021
Kuraray receives a bio polyester patent from Japanese firm Mitsubishi
Mitsubishi Chemical Corporation, based in Tokyo, has signed a licensing deal with Kuraray, a Japanese chemical and

July 6, 2021
Marici will debut in Selfridges’ Project Earth luxury designer edit
Marici, a plant-based luxury accessories company, will debut exclusively in Selfridges on July 8 as part of the